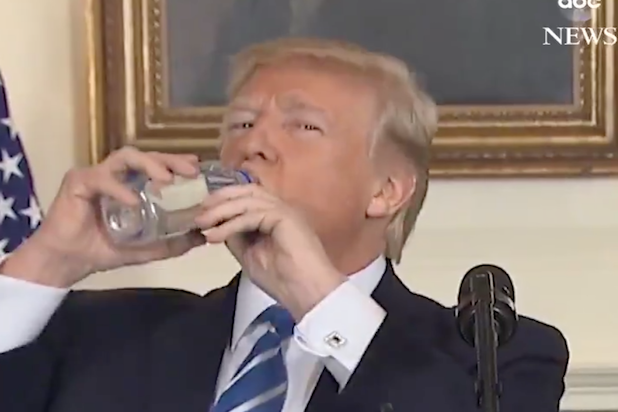 Time Magazine isn’t saying Donald Trump is lying, but it did say the President is “incorrect” in his claim Friday that the publication had consulted him about its Person of the Year 2017 selection.

Early Friday afternoon, Trump baffled the internet with a tweet that said “Time Magazine called to say that I was PROBABLY going to be named “Man (Person) of the Year,” like last year, but I would have to agree to an interview and a major photo shoot.

“I said probably is no good and took a pass. Thanks anyway!”

The claim seemed fairly unbelievable, particularly the idea that recipients of the title can veto their selection, and it was met with a wave of intense skepticism on Twitter. Well, three hours later, Time has finally responded and looks like that skepticism was warranted.

The President is incorrect about how we choose Person of the Year. TIME does not comment on our choice until publication, which is December 6.

The statement doesn’t actually say whether or not Trump actually received a call; a spokesperson for Time did not immediately respond to a request from TheWrap for further clarification.

Time’s Person of the Year is someone (or in rare cases, a concept or event) deemed to have had the most significant impact on current events over the last year. (It is not, per common misunderstanding, a statement of approval for the named person.) The recipient is selected by the magazine’s editorial board, though readers can also vote in an online poll that remains open until Dec. 3.

Trump was Time’s Person of the Year for 2016, and if he were selected for 2017, he would be only the second person to be named two years in a row. The first was Richard Nixon, who was POTY in 1971 by himself and in 1972 alongside his National Security Advisor Henry Kissinger, just as the Watergate scandal was beginning to gain steam. So being POTY is not necessarily a good thing …

We’ll have to wait until Dec. 6 to find out if POTUS will get his first chance to follow in Nixon’s footsteps.