One month, more or less.

From the announcement of Oscar nominees to the unveiling of the winners, 33 days. From the mailing of Oscar ballots on Wednesday to the due date for their return, 20 days.

But in a year in which so many races already seem to have prohibitive favorites – not Best Picture, but many others, including the four acting races – I just have to wonder if, eventually, there will be some movement. 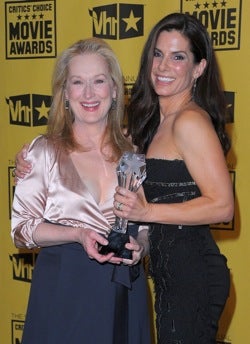 I thought about it again when Sandra Bullock told reporters at the Santa Barbara International Film Festival, “I’m so not winning an Oscar.” She very good at predicting Oscar winners, she said; she knows who’s wining Best Actress, and it’s not her.

Not to pick on Bullock, who by all reports is a completely wonderful person, and who gives a fine performance in a likeable movie that isn’t exactly Best Picture material (though I guess it’s better than “Invictus,” which might have gotten the slot otherwise) …

But I have to wonder if, in that month between the nominations and the Oscars, or that three weeks between the ballot mailing and the deadline, Academy members are going to fully embrace the idea that once seemed so fresh and exciting: giving an Oscar to Sandra Bullock instead of Meryl Streep.

Or are they going to have second thoughts, and start rethinking the giddy rush of watching a “wow, she’s a real actress!” performance?

Streep, of course, has been here before. With 16 nominations and only two wins, she’s lost to “who knew?” performances in the past, most notably Cher in “Moonstruck,” Gwyneth Paltrow in “Shakespeare in Love” and Catherine Zeta-Jones in “Chicago.”

(Slightly off-topic: it’s rather remarkable to realize that fully one-third of the Best Actresses for the past quarter century had to beat Streep to win their Oscars.)

I’m sure Meryl will take it in stride if Bullock’s name is added to that list, though I suspect others will be a little flummoxed.

Including, perhaps, Bullock herself, who in the press room of the SAG Awards rhapsodized in a tone of outright awe about one particular scene from “Julie & Julia.”

“When she found out, in a scene with Stanley, that her sister was going to have a child, and she kept saying ‘I’m so happy, I’m so … ’” Bullock shook her head. “There was Meryl, there was Julia, there was that balance of drama and comedy and heartache… And when you see moments like that, as a fellow actor … that is what it’s all about, that is what you aspire to.”

Will Bullock give her colleague similar praise backstage at the Oscars? Yeah, she probably will; at this point, I suppose you’d be foolish to bet against her.

But a month is a long time for voters to come to terms with the idea. It’s time for reconsideration, for an assessment of what Streep did and has done, or even for a little momentum swing in favor of two remarkable young actresses, Carey Mulligan and Gabourey and Sidibe.

I don’t know. I’m just saying that the clock is ticking … and that clock isn’t necessarily a friend to every nominee.