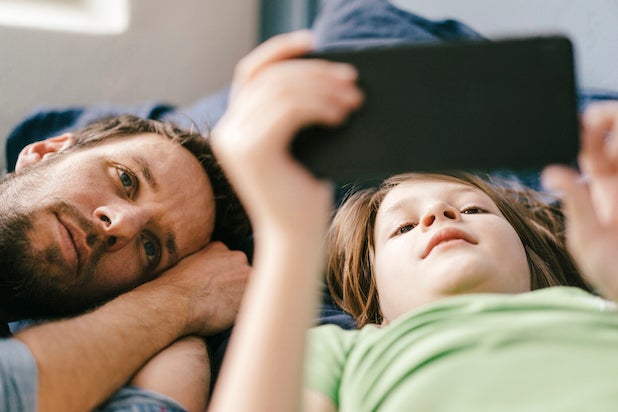 Television isn’t dead, yet — but it’s certainly dying a slow death at the hands of your cell phone.

For the first time ever in the U.S., people are spending more time on their mobile devices than watching TV, according to new data shared by eMarketer on Wednesday. Americans are spending on average 3 hours and 43 minutes per day on their phones, compared to “only” 3 hours and 35 minutes watching TV each day.

That eight minute gap may seem trivial, but it’s set to widen: eMarketer projects consumers will average nearly 4 hours per day on their phones by 2021, while average TV time is expected to drop to 3 hours and 22 minutes per day.

Also Read: Tech Giants and Billionaires Who Have Bought Up Legacy Media, From Marc Benioff to Jeff Bezos (Photos)

“We’ve expected that mobile would overtake TV for a while, but seeing it happen is still surprising,” eMarketer analyst Yoram Wurmser said. “As recently as 2014, the average U.S. adult watched TV nearly 2 hours longer than they spent on mobile devices.”

In the last five years, time spent on mobile devices has increased more than 70 minutes on average according to the data, which included survey responses from more than 15,000 people.

Of course, some would point out smartphones have more to offer than TV, allowing users to watch content while also jumping between their favorite apps. It’s also worth mentioning that mobile devices and the television often go hand-in-hand — with fans of “Game of Thrones” or the NBA Finals being able to easily and instantly discuss the action on Twitter, Facebook and other apps.

And considering the big-time streamers like Netflix and Hulu are mobile-friendly — and the same is most likely the case for upcoming services from traditional stalwarts like NBCU and WarnerMedia — it may be a bigger issue for TV makers than content makers. People are still looking for shows, they’re just looking for them on their phone now, rather than simply flipping channels.

Also Read: 'Dead to Me' Renewed for Season 2 by Netflix

That tradeoff is reflected in the data: time spent watching TV has decreased 21 minutes in the last two years to three hours and 35 minutes per day, while time spent on cell phones has increased 18 minutes per day on average to 1 hour and 37 minutes.