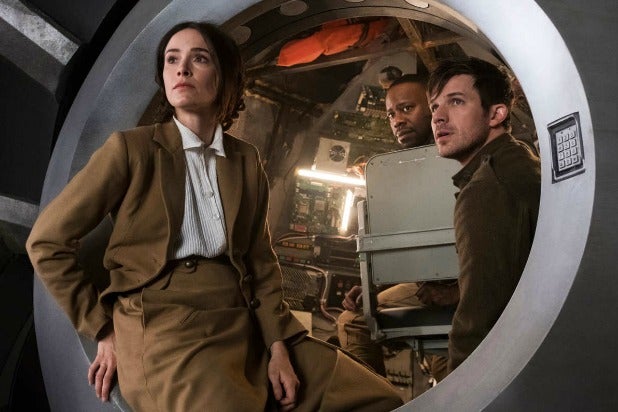 “Timeless” showrunner Eric Kripke is calling on fans to help keep the show from getting canceled — again.

“I’m afraid we have to ask more of you,” Kripke said on Twitter Saturday, addressing fans of the show, or as he likes to call them, the “Time Team.”

“We need you to suit up (in period clothes, preferably), climb in the Lifeboat (it’s cool, it holds 4 people now), and get to work,” he wrote. He said the “truth of the situation” is that “Timeless,” which stars Abigail Spencer, Matt Lanter and Malcolm Barrett, is “once again on the bubble.”

“We are not in a stable or safe position. We could very well get canceled — for good, this time,” Kripke warned. He said that NBC “genuinely loves the show and tells us often,” but the ratings just aren’t high enough.

“I know we’re on late for a family show (I agree!) and many other factors, but ultimately, it doesn’t matter. Network television is based on ratings,” he continued. “That’s the bottom line.”

So, what’s a Time Team member to do? Watch live, Kripke said.

“And stay noisy!” he added, saying that hearing how much fans wanted the show to continue helped them get a second season last year, even after being canceled.

Kripke said he wants the show to come back because he’s proud of it. “All the writers are,” he said. “Look, we live in chaotic, divisive, angry times. A lot of people scream very loudly about hat divides us. But we get to create a show that highlights all the things that unite us.”

Read Kripke’s full note to fans on Twitter below.

Star Abigail Spencer echoed Kripke in a tweet of her own, and encouraged fans to read his note.