Polanski has sex with a 13-year-old model in L.A. Pleads guilty to reduced charges of "unlawful sexual intercourse with a minor" as part of a plea bargain and undergoes psychiatric evaluation in a prison facility. 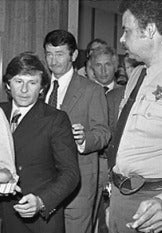 Polanski flees to France, where he has citizenship. A U.S. warrant is issued for his arrest but France has a limited extradition agreement with the U.S.

Documentary "Roman Polanski: Wanted and Desired" is released. It makes a detailed case for misconduct by Judge Rittenband and prosecutors.

Polanski’s legal team asks that case be dismissed, in part because of information in "Wanted."

New Polanski motions filed to dismiss case and to move it out of L.A., where alleged judicial misconduct occurred.

Polanski’s motions denied. He’s told to surrender before any deal can be reached. He appeals.

On September 26, the director is arrested in at Zurich airport.