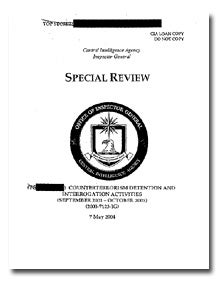 The New York Times posted it on its website, and is soliciting help from its readers in annotating the entire 259 page document:

We invite readers to help us annotate and make sense of the new details revealed in the report and other supplementary materials we will also post as they are released. Let us know, using the comments box below, what you think is interesting in the report and the other documents — and please be specific, citing page numbers and paragraphs along with your observations.

In blog parlance, this is known as crowdsourcing — something of a first for the Times.

So far, just 35 readers have taken the bait (compare that to, say, the 205 comments generated by Sunday’s article about Julia Child’s Hollywood-aided best-selling cookbook — her first in 48 years.

This is not the first time the Grey Lady has looked to leverage insight from its readers. The Times’ in-house research and development lab, for instance, has always been interested in testing its layout and audience development and analytics, and what its readers think of e-ink.

Its “Insight Lab” — launched earlier this year — bills itself as an “ongoing conversation between the New York Times and its readers about the future of the company” — including the future viability of “paid content” on its website. (More than 3,000 readers have joined so far.)

In April, the Times even solicited readers to upload their Grateful Dead photos to produce an interactive slideshow on the eve of the Dead’s comeback tour.

But this is one of the first pure editorial crowdsourcing projects I can recall.