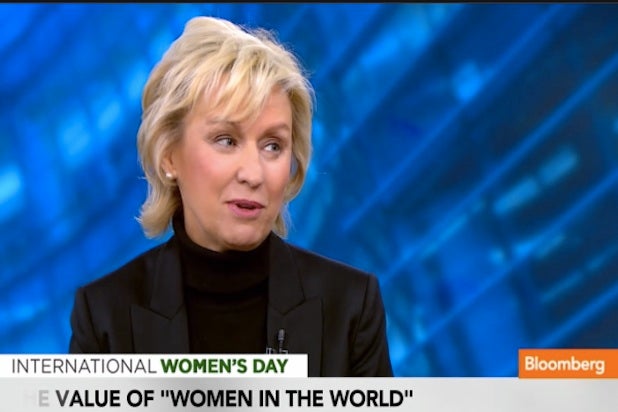 Tina Brown is glad to be gone from Newsweek right now.

The magazine’s former editor responded Friday to the controversy swirling around the Bitcoin cover story that claimed to reveal the founder of the digital currency. The subject of the profile, Dorian Nakamoto, vehemently denied the story in an interview with the Associated Press.

The host of Bloomberg Television’s “Market Makers,” Erik Schatzker, asked the publishing doyenne what would happen if Newsweek did, in fact, get it wrong.

“That would be rough,” Brown acknowledged bluntly. “All I can think of is I’m so glad I’m not the editor!”

Newsweek released a statement Friday backing up their report. “Ms. Goodman’s reporting was motivated by a search for the truth surrounding a major business story, absent any other agenda. The facts as reported point toward Mr. Nakamoto’s role in the founding of Bitcoin.”

Later in the interview, Brown revealed her feelings about the newsmagazines return to print.

“I actually always thought there should have been a print component to the digital Newsweek,” she revealed. “A small print component. But it is very hard. The ship’s sailed. It really is a hard thing to bring it back. However, I do wish them well because I want every magazine that is out there to survive.”