NBC’s “The Titan Games” hosted by Dwayne Johnson has always been about equality — not only are the contestants equally divided between men and women but also in the sense that every type of athlete, whether professional or not, can compete.

The competition show is back for its second season, and executive producer Dany Garcia teased it as an even bigger nail-biter than the first.

“Our athletes come in all shapes and sizes — some are incredibly strong, and some are not quite as strong, which is a great challenge because not only are you looking at male and female, but you’re also looking at different body types and strengths,” Garcia told TheWrap. “You want to vary the challenges so that you are challenging the body and the mind in different ways. These are athletes that we need to have a challenging conversation with in many different ways, and that allows them all to shine.

“That’s the same principle that applies to men and women — the men and women aren’t competing against each other,” she went on. “The moment of drama is the athlete against the competition. It’s not about how strong something is or how heavy it is.  We were able to navigate that. At the end of the day, what you’re seeing them do, whether they’re male or female, you are thinking, ‘Holy c—, that looks hard as s—!’ We did it really well in Season 1, and in Season 2, we mastered it and we’ll continue to get better.”

Inspired by the former pro wrestler’s intensive workout regimen, “The Titan Games” is designed as a test of physical strength and “mental and emotional fortitude.” Featuring everyday Americans, as well as professional athletes competing for charity, the show awards a $100,000 prize to the winner.

The first season premiered last January and scored a 1.7 rating in adults 18-49 with 6.0 million total viewers overall, according to Nielsen’s live-plus-seven numbers. A. Smith & Co. Productions produce in association with Universal Television Alternative Studio and Johnson and Garcia’s Seven Bucks Productions. Garcia, alongside fellow executive producers Johnson, Arthur Smith, Hiram Garcia, Brian Gewirtz, David Friedman and Anthony Storm, have focused on how Season 2 could be even more successful than the first. Being a professional female bodybuilder, Garcia knew it was important to be an advocate for what the female athletes were experiencing.

Also Read: Dwayne Johnson's 'Titan Games' to Return for Season 2 in May 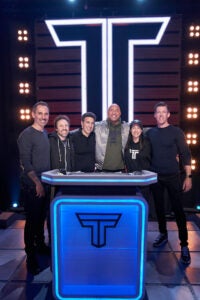 “Everyone was already in the space of, what can we do to make it better?” Garcia explained. “The lane I get to always hold is really as a professional athlete thinking about what are our athletes going through, and thinking about, what is the conversation around our women athletes? I get to play this dual role here, where usually I’m in the audience for it, but now I get to be an advocate for what they’re going through… It’s really, are we taking care of these athletes, what happens when they’re done, how are we discussing the women?”

“From the start, we’ve been a strongly balanced organization. We know how to look at language and a point of view in discrepancies that people don’t recognize,” Garcia continued. “We can say we’re really forward in making sure that all athletes are being discussed and highlighted in the manner of which we think the world should be. That I take very seriously.”

The new season, which completed filming earlier this year before the coronavirus outbreak forced production in the U.S. to come to a halt, comes at a time when networks and audiences are in search of new content. Sports are on hold for the foreseeable future, including NBC’s coverage of the Tokyo Olympics, which were postponed until next year. “The Titan Games” will return with a two-hour episode before moving back to its regular 8 p.m. time slot the following week.

“We are so audience first, and it comes down to what they need from us. And to be able to have this be something teed up right now, it’s perfect,” Garcia said of the timing of the premiere. “It’s an incredibly challenging time, and for us to be in a position where we can be of service from a business aspect, it’s really powerful.”

She added that everyone on the crew has put in the hours to make sure it is ready for a May 25 release. Even Johnson has been recording his narration on his iPhone from home. “The audiences are going to see wonderful people, who we were excited to see. It’s all about how great can we be in this sport together? It’s a nail-biter.”

One important thing to note is that 21 contestants are female, and 21 contestants are male. For Season 1, it was 32 men and 32 women competing. This was always the plan for the team behind “The Titan Games” in an effort to tell the stories of every single type of athlete — and women, according to Garcia, bring something to the table that men don’t. 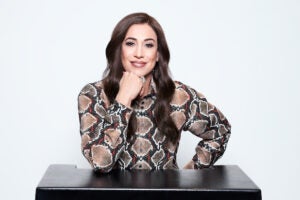 “The storytelling around female athletes is not as robust and experienced as it is around male athletes,” Garcia said. “Female athletes are fascinating  — we have a higher pain tolerance, and women carry emotionality in the way they compete. There is a dynamic experience that they’re going through that sometimes you won’t see in a male competitor. You see them emotionally and physically hit the wall. You see them double down on the emotional wall. When you are comfortable with the depth of the emotion that women tend to express, and you put that in a competitive field, sometimes people think that’s a hindrance but it’s actually freeing. There is a storytelling there that happens, and I love that.”

She added: “It’s fantastic — this just advances the opportunities for female athletes.”

In the second season, fans can expect more time with the contestants — as a new format allows them to stay in competition longer — and more intimacy with Johnson as he moves around the arena.

But “The Titan Games” wasn’t the only project of Garcia’s that was affected by the coronavirus pandemic. Seven Bucks Productions’ “Red Notice,” which stars Johnson, Gal Gadot and Ryan Reynolds, was in the middle of filming when production was shut down to ensure everyone’s safety.

“We’ve been extremely active as to how and when we are going back and the majority of conversations are about, how do we keep everyone safe?” Garcia said about resuming production. “That’s paramount: Creating really fundamental plans that we keep everyone safe 24 hours a day and setting up a process. I’d like to think by the fourth quarter, we’re back in production.”

Seven Bucks Productions has produced films like “Jumanji: Welcome to the Jungle” and its sequel “Jumanji: The Next Level,” as well as “Skyscraper,” “Rampage,” Fighting With My Family,” “Shazam!’ and “Hobbs and Shaw.” Its upcoming projects include “Jungle Cruise,” “Black Adam” and “Shazam 2.” On the TV side, the company has produced “Ballers” and “Finding Justice,” among others, and is looking forward to “Young Rock” and “Muscle Beach.”