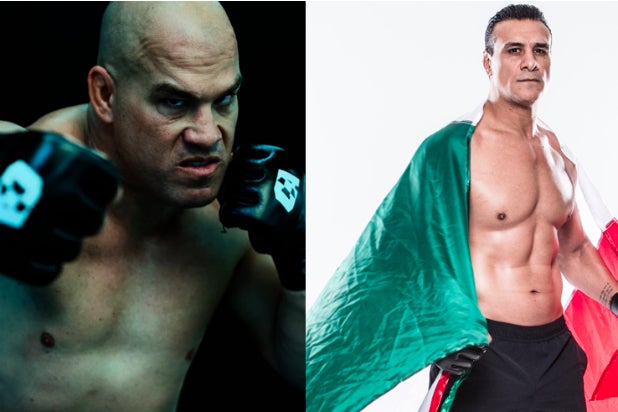 Tito Ortiz and Alberto Del Rio are set to throw hands, feet and everything in between (or at least, the elbows and the knees) Saturday at a Combate Americas “Winner Take All” MMA pay-per-view event on FITE TV.

The offense on display there will be the real deal, not the “working” pro-wrestling punches that Del Rio (who now professionally goes by Alberto El Patrón, his real name is José Alberto Rodríguez) so famously threw in his days as WWE Champion. Don’t count him out, however — Patrón has a pretty impressive professional mixed martial arts record of 9-5.

Former UFC Light Heavyweight Champion Ortiz is 20-12 in the sport that he helped bring to the mainstream masses, but the Huntington Beach Bad Boy also has some professional wrestling experience. We asked both men about the challenge of going back and forth between firing off real punches in the cage and fake ones in the squared circle, and which transition is the harder one.

The 44-year-old Ortiz, who is two years older than El Patrón, said his transition to professional wrestling and its pulled punches was made easier by his film work.

“I understood it because I was able to shoot some movies, having to be able to throw the punches as a visual for the camera, and make it look like you hit the guy,” Ortiz, who was born Jacob Christopher Ortiz, told us. “When I did TNA (Total Nonstop Impact wrestling)… I punched Jeff Jarrett and I actually punched him — on accident. But I really did punch him. I gave him a fat lip, and he was like, ‘You son of a bitch’ — after he woke up.”

“I think it’s a little easier than doing it the opposite way, of trying to learn to throw a harder punch compared to pulling a punch,” he added.

El Patrón would agree with that.

“It takes some time,” former WWE Superstar Del Rio told us. “When I restarted training for this fight, at the beginning I was not as trained in my punches, I was not as trained in my arm. There’s a whole way to connect and that was one of the things that all of my coaches have been working with me. They’re like, ‘Man, you’re pulling your punches back. Why, why are you doing that?’ And I’m like, ‘Ah, dammit, it’s pro wrestling.'”

“And when we were doing amateur wrestling and they would punch me, I would go down,” El Patrón continued. “And I was like, ‘OK, OK, I need to reset everything and forget about pro wrestling for a while.'”

“Now, I’m not doing any pro-wrestling shows, I haven’t been doing that for a while. But I’m pretty sure that it’s going to be a little bit difficult for my opponents,” El Patrón said. “Whenever I go back into a pro-wrestling show, I’m 100% sure that I’m going to kick or punch one or two guys more than I should have. But, it is what it is, that’s the way it is. Two different businesses, entertainment businesses, but in one you have to perform and go 100% and the other one you just have to entertain.”

“Since my last TNA visit, I’ve learned a lot. I’ve learned camera angles. I’ve learned how to throw a [working] punch a lot better,” Ortiz told TheWrap. “But right now, it’s strictly just about the fight, so I’m trying to punch through everything…I’m trying to knock things out.”

Ortiz’s fandom adds even more intrigue to this bout. The “Winner Take All” title here is quite literal — and it literally has to do with title belts.

Some pretty sweet additions to even the most crowded of trophy cases.