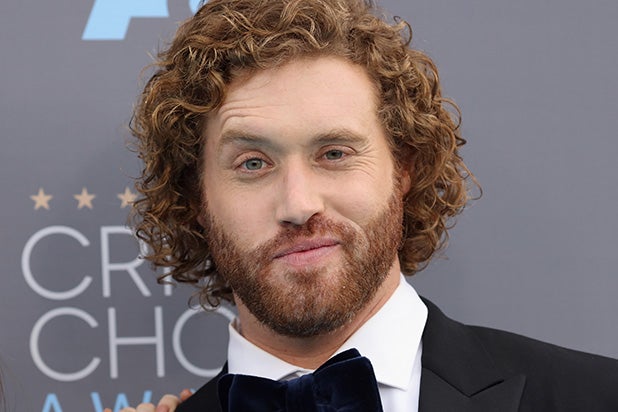 “Silicon Valley” actor T.J. Miller and his wife, Kate, have responded to accusations that Miller sexually assaulted and punched a woman while in college.

“We stand together in stating this is nothing more than an unfortunate resurgence of her lies designed to wreak havoc on two happily married people in the public eye,” the Millers’ statement reads. “We stand together and will not allow this person to take advantage of a serious movement toward gender equality by allowing her to use this moment to muddy the water with an unrelated personal agenda.”

The statement also says, “we met this woman over a decade ago while studying together in college, she attempted to break us up back then by plotting for over a year before making contradictory claims and accusations.  She attempted to discredit both of our voices and use us against one another by trying to portray Kate to be a continuous abuse victim of T.J. (further efforts to hurt the two of us).”

Also Read: TJ Miller Says 'Silicon Valley' Is 'Only Going to Become Better With Me Not on It' (Video)

Kate and T.J. Miller were dating in college, and when Kate went abroad, Miller starting dating the accuser mentioned in The Daily Beast story. Upon Kate’s return, Miller reunited with her, an individual with knowledge told TheWrap.

In an interview with The Daily Beast, a woman who asked to remain anonymous and was identified by the publication as Sarah, said that she and Miller attended George Washington University and fell into the same comedy troupe, where they struck up a relationship.

Sarah said the first encounter took place in 2001, recalling that she had “a lot to drink” and admitted that there are “parts of [the incident] I don’t remember.” Sarah said she remembered that she and Miller were “fooling around” at her apartment when he began “shaking me violently” and punched her in the mouth during intercourse. Sarah said she suffered a fractured tooth and a bloodied lip.

A few days after the first incident, the two began having consensual sex when “Miller became violent again,” and said her memory of that night was “crystal clear.”

“We started to fool around, and very early in that, he put his hands around my throat and closed them, and I couldn’t breathe,” she explained. “I was genuinely terrified and completely surprised. I understand now that this is for some people a kink, and I continue to believe it is [something] that should be entered into by consenting parties. But, as someone who had only begun having sexual encounters, like, about three months earlier, I had no awareness this was a kink, and I had certainly not entered into any agreement that I would be choked.”

Sarah said she choked so “audibly” that her roommates could hear and asked if everything was okay. Then, she said, Miller pulled her back to bed and “anally penetrated me without my consent, which I actually believe at that point I cried out, like, ‘No,’ and he didn’t continue to do that — but he also had a [beer] bottle with him the entire time. He used the bottle at one point to penetrate me without my consent.”

Sarah said she confided in her roommates and one of them corroborated the story to The Daily Beast. Another housemate, Katie Duffy, recalled the incident to the publication as well and said Sarah’s physical appearance the next day raised alarm.

“She looked like she had been through a rough night — I recall seeing bruises [on Sarah],” Duffy said. “One roommate asked if she wanted to go to the police. Others offered to take her to the hospital, given how she looked.”

Sarah inquired with mutual friends about the incident, who responded, according to her: “Yeah, that’s just T.J.” Almost a year later, Sarah said she went to GW’s campus police at which point Miller was in his last year at the university. After a couple weeks, Sarah said the university told her the issue had been resolved. A spokesperson for GW told TheWrap, “the university takes allegations of sexual assault very seriously. Due to privacy considerations for our students, we will not comment on any current or former student’s university records.”

Four friends spoke to The Daily Best saying that the actor “couldn’t have done this.”

“I’ve known T.J. since college, always known him to be a very caring person, and respectful, particularly toward women,” one friend said. “And he loves his wife very, very much.” According to The Daily Beast, Miller told friends over the years that he was wrongfully accused.

A source also produced a thread of emails between Miller and someone who dated Sarah in later life. There is no direct mention of the incident itself — rather, both parties are trying to come to an understanding.

An ex-boyfriend of Sarah’s told The Daily Beast, “I attended George Washington University for undergraduate studies from 2000 until December 2003… I had a romantic relationship with [this] woman, who spoke with me about T.J. Miller sexually assaulting her,” Matt Lord wrote in a statement to The Daily Beast. “At the time I believed the statements she made regarding the assault by Mr. Miller, and I continue to believe the statements she made are true. She was engaged in student conduct proceedings regarding the sexual assault, and I remember the emotional toll that the assault and the subsequent conduct hearings placed on her.”

According to the publication, Miller has privately joked about violence against women in the past, prompting some female performers to decline working with him. Four female comedians and bookers told The Daily Beast they had heard about the accusations.

“We met this woman over a decade ago while studying together in college, she attempted to break us up back then by plotting for over a year before making contradictory claims and accusations.  She attempted to discredit both of our voices and use us against one another by trying to portray Kate to be a continuous abuse victim of T.J. (further efforts to hurt the two of us).  She was asked to leave our university comedy group because of worrisome and disturbing behavior, which angered her immensely, she then became fixated on our relationship, and began telling people around campus “I’m going to destroy them” & “I’m going to ruin him.”

We are confident that a full consideration of accounts from and since that time will shed light and clarity on the true nature of not only this person’s character, and also on the real facts of the matter.  (See the e-mails referenced).

We stand together in stating this is nothing more than an unfortunate resurgence of her lies designed to wreak havoc on two happily married people in the public eye.

She began again to circulate rumors online once our relationship became public.

Sadly she is now using the current climate to bandwagon and launch these false accusations again. It is unfortunate that she is choosing this route as it undermines the important movement to make women feel safe coming forward about legitimate claims against real known predators.

We stand together and will not allow this person to take advantage of a serious movement toward gender equality by allowing her to use this moment to muddy the water with an unrelated personal agenda.

We feel we all have an obligation now more than ever to prevent people from using reporters to spin lies into headlines, and focus instead on what is real.

We both champion and continue to stand up for people everywhere who have truly suffered injustice seeking to have justice brought into their lives.”