With the 20th anniversary of the 9/11 terrorist attacks approaching next month, many networks will be airing what will hopefully be respectful and poignant specials of one America’s darkest days. We doubt anyone would consider the one TLC has announced among those.

The Discovery-owned cable network has set a 9/11 special starring “Long Island Medium” Theresa Caputo, in which she will meet with victims’ families “to deliver messages of healing and heroism from the spirits of their loved ones.” 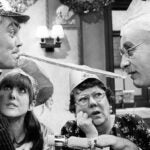 Also Read:
Before ‘Sherlock,’ Una Stubbs Starred in the British Sitcom That Inspired ‘All in the Family’

Some of the people for whom Theresa will give readings to include:

The announcement of the special has already sparked outrage, given the extremely sensitive nature of a day where more than 3,000 American died in the terrorist attacks in New York and Washington D.C.