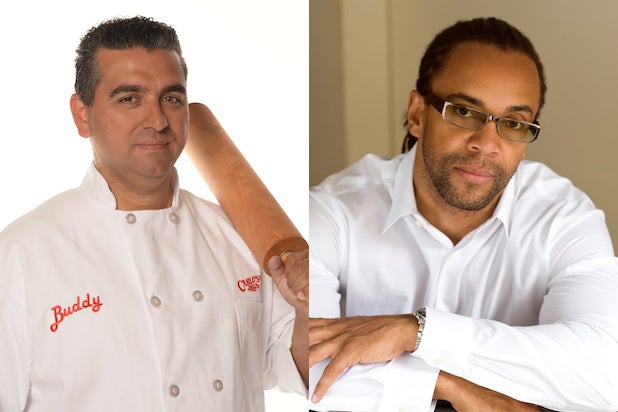 From left, Buddy Valastro and Art Edwards of Cakehouse Media.

“Cake Boss” star Buddy Valastro is baking up a new venture. The TLC star is launching his own production company, Cakehouse Media, with producer Art Edwards, TheWrap has learned.

Cakehouse Media plans to offer a fresh approach to lifestyle programming with original content for broadcast, cable and digital platforms in the United States and worldwide.

“I wanted the opportunity to create the type of programming I love to be in and watch — wholesome TV shows that the entire family can enjoy together,” Valastro said in a statement. “I’m now going to be able to channel some of the creativity I’ve always put in my cakes into developing television.”

Its development slate will include scripted projects ranging from family fare to provocative drama. Similar to “Cake Boss” — which launched three spinoff shows “Next Great Baker,” “Kitchen Boss” and “Buddy’s Bakery Rescue” — the company will be looking to create franchises that will include various global industries.

“We’re both excited about our global initiative,” Edwards said. “We are going to take advantage of Buddy’s global popularity and sell shows all over the world.”

Valastro, who not only starred in but has served as a producer on “Cake Boss” and its spinoffs, will serve as Cakehouse Media’s president. He’ll take an active role in shows he will appear in and manage the company’s business and finances. Edwards, who has served as an executive producer of the “Cake Boss” franchise, will serve as CEO and oversee the day to day operations of the company, define its vision and manage the development of shows.

“Art and I are like family. We’ve been working together since the beginning of my television career,” said Valastro, who first met Edwards while the baker competed on “Food Network Challenge” on which Edwards served as an executive producer.

Edwards added, “Buddy is like a brother to me. I’ve never met someone who works harder. He is focused and ambitious. We make a great team.”

Valastro serves as head baker for his family-owned and run Carlo’s Bakery in Hoboken, N.J. and five other locations. He opened his first restaurant — called Buddy V’s — at the Venetian Las Vegas in 2013, and has also written several cookbooks.

In addition to serving as the co-creator and executive producer on the “Cake Boss” spinoffs and serving as EP on “Food Network Challenge,” Edwards’ TV credits include writing on various MTV shows, including “Singled Out,” “The Cut” and “Dismissed.” He has also produced on “The Bachelor,” “Are You Hot,” “High School Reunion,” “The Next Great Champ,” “The Cut,” and “I Want To Be A Hilton.”