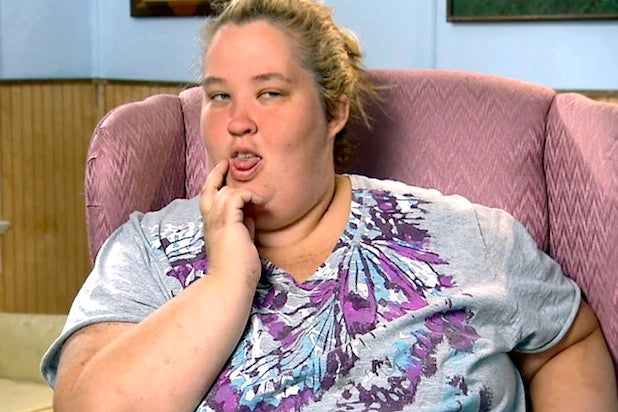 June Shannon aka Mama June has posted a video in which she addresses TLC’s cancellation of “Here Comes Honey Boo Boo,” addresses reports that she’s dating a convicted child molester whose victim was a family member and thanks the show’s fans.

“The statement of me dating a sex offender is totally untrue,” Shannon said in the Facebook video recorded minutes after receiving a phone call from TLC informing her that the network has canceled the show.

“I would never ever, ever put my kids in danger. I love my kids too much. That is my past. I have not seen that person in 10 years.”

Shannon is allegedly carrying on a relationship with Mark McDaniel, a 53-year-old who served 10 years in prison for molesting an 8-year-old relative of Shannon’s. The abuse of the child included forced oral sex. McDaniel was released in March and he’s now a registered sex offender in Georgia.

Although Shannon promises further updates on the family, she reveals that TLC has asked the family to stay quiet “for a while.”

“Things happen for a reason in life and you live and learn and then you do it,” she said. “The family is going to stay quiet for a while, because TLC has kind of told us to hush-hush.”

The reality star also gave an update of her relationship with Mike “Sugar Bear” Thompson, Alanna “Honey Boo Boo” Shannon’s father. The couple finally married after nine years together in September 2013, which aired on the TLC show. A year later, the couple announced their separation.

“Me and Sugar really had broke up, but we are friends and we have stayed civil,” she said. “We’re better off friends than we are a couple. We came to notice that.”

“Here Comes Honey Boo Boo,” a spinoff of TLC’s child pageant series “Toddlers and Tiaras,” had been under fire from those who opposed child beauty pageants and the show’s portrayal of Southern life, since it premiered in 2012. In the video, Shannon thanks fans for their “ongoing support” through the show’s four seasons.

“We just want to thank from the bottom of our hearts the support that we’ve had from our fans since May 2012,” Shannon said. “That ongoing support, the love, the care-ness, that y’all fans have shown us. The experience has been awesome to us. The girls have been able to do things that they would not normally had to do.”

“Honey Boo Boo” had been a consistent ratings winner for TLC. Its premiere episode earned a 1.6 rating in the advertiser-coveted 18-49 demographic, attracting 2.2 million viewers. The Aug. 29, 2012 episode, which aired during the Republican National Convention, made news when it attracted nearly 3 million viewers and earned a 1.3 rating among the advertiser demo, beating Fox News convention coverage’s 1.2 rating and NBC’s convention coverage rating of a 1.1.