Walking near Grand Central Terminal, I spotted this ad for TLC’s new reality series, “Police Women of Broward County” – a sort of “Cops: Women,” which premiered earlier this month. 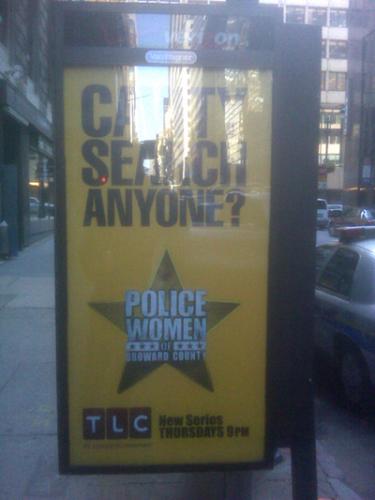 Don’t get me wrong, I’m all for sexy, titillating ad campaigns. But they have to make sense.

A few things to note.

But how many of those fantasies involve a cavity search? OK, don’t answer that.

Better question, I guess, would be how many cavity searches are performed by cops? According to trusty Wikipedia, “most western authorities specify that these searches can only be done by medical professionals.”

So, as far as plausibility is concerned, they might as well’ve gone the Carl’s Jr. route and hired Paris Hilton to wash a car.

The show itself doesn’t play up the officers’ sex appeal – in fact, it’s an almost asexual portrayal. (Except for the undercover prositute, but even that’s rendered rather matter-of-factly.) But the marketing, in this case, certainly crosses into muddy misogyny territory.

A male-baiting street ad is one thing, but just what demo is TLC trying to turn onto this show? A quick visit to the show’s website makes the answer less clear. The homepage includes a black-and-white image of an attractive woman donning a bulletproof vest, flanked by an ad for Purina Cat Chow.

I asked the network that introduced the world to “Jon & Kate Plus 8” what they were thinking with the ad. They declined to comment.