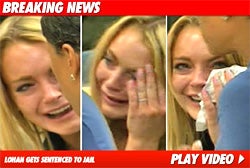 Levin said that broke the site's previous mark of 845,000 viewers for Lohan's May 24 hearing. Before that, the most views registered for a live event were on June 25, 2009 — the day Michael Jackson died.

He told Broadcasting & Cable an average user spent 16.3 minutes on the site, compared to its usual five-to-seven minute average.

All of which will make Lohan's scheduled surrender on July 21 (or before, though less likely) a big, helicopter-saturated live-media event.

Meanwhile, according to PopEater, Lohan is angling to be paid more than $1 million for her first post-penitentiary interview. Paris Hilton did the same thing when she got sprung before giving it to Larry King.