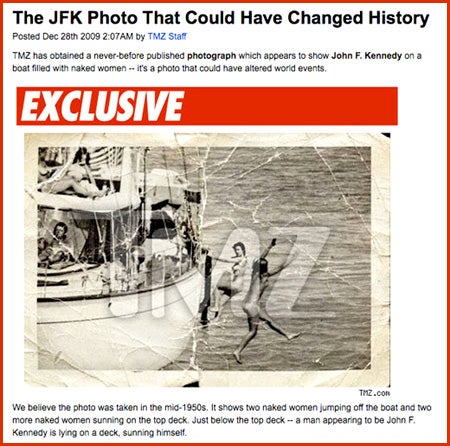 TMZ thought it was having a good day.  Harvey’s Levin’s gossip site was the subject of a relatively glowing profile in the New York Times (sample: “Many in the media are likely to remember 2009 as the year when they stopped scoffing at TMZ”) and had what it thought was an “exclusive” historical coup: a “never-before published” black-and-white photograph — showing John F. Kennedy Jr. on the deck of a boat filled with naked, frolicking women – that it said “could have torpedoed his [presidential] run, and changed world history.”

TMZ said it consulted “multiple” forensic photo experts, who concluded that the image – likely taken in the 1950s — was authentic. The site even included a video of one of them – Jeff Sedlik – testing the photo.

One problem: as the Smoking Gun points out, the photo had already been published – in color — in the November 1967 issue of Playboy. (Title of the spread: "Charter Yacht Party: How to Have a Ball on the Briny with an Able-Bodied Complement of Ship’s Belles.")  “The ‘Exclusive’ TMZ image is the same photo, just reproduced in black and white,” TSG reports. 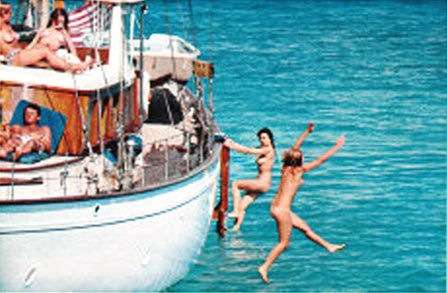 As the New York Times notes, this media-on-media takedown was a bit unusual: the Smoking Gun is owned by Turner, a unit of Time Warner, which, of course, owns TMZ.

TMZ didn’t say exactly how it obtained the photo or what it paid to publish it, except that the photo was “eventually given to a man who owned a car dealership on the East coast.”

“The man kept it in a drawer for years, and would brag to friends he had an image of JFK on a boat with naked women. The man died 10 years ago and one of his sons inherited the photo.”

Hopefully for Levin’s sake, TMZ got their money back.

UPDATE: TMZ now admits that the photo is a fake.