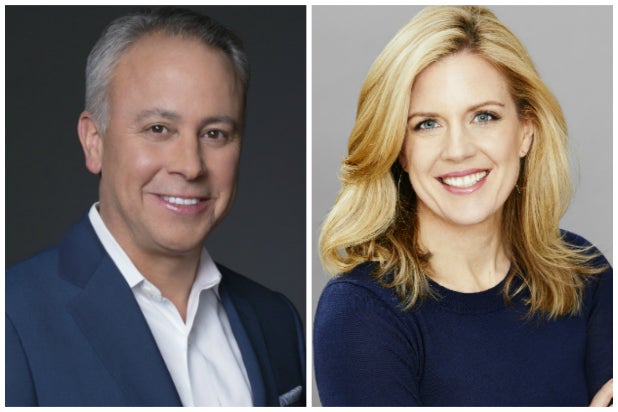 “Today” show executive producer Don Nash is leaving his post after nearly 30 years with the NBC News morning show, TheWrap has learned. He’ll be replaced by senior producer Libby Leist, who will be promoted to run the 7 a.m. and 8 a.m. hours.

NBC News chief Andy Lack informed his staff of the changes this morning. Additionally, Nash sent his own note out to employees. TheWrap obtained both internal memos, which are posted in their entireties below.

It is not unusual or unprecedented for an executive producer-shuffle following a seismic talent shift, like the one that now sees Hoda Kotb sitting in Matt Lauer’s seat. A new executive producer took over NBC’s “Nightly News” when Lester Holt replaced Brian Williams. The same thing happened when Chuck Todd inherited “Meet the Press.”

“With this change in anchors, and having rethought some of his priorities, Don Nash has decided to step away from his executive producer role at ‘Today,'” Lack wrote in his email.

He continued: “We’ve offered him a number of roles within NBC News and NBCUniversal, and we hope he’ll stay in the family.”

Read Lack’s full memo below our “Also Read” suggestion, which helps explain why NBC News isn’t too bummed about the Lauer-for-Hoda swap.

The TODAY show couldn’t be in a stronger position. Savannah and Hoda have seamlessly taken their seats and we’re off to a fantastic start in 2018. This is a tribute to them and the whole team at TODAY.

With this change in anchors, and having rethought some of his priorities, Don Nash has decided to step away from his Executive Producer role at TODAY.

I cannot thank Don enough for everything he contributed in nearly 30 years at TODAY – almost half of the show’s 66-year history. He led the TODAY team through many transitions and got the show back to number one. He leaves with every aspect of the show on top and with a legacy he should be proud of. As you all know so well, among many other skills Don is one of the best live control room producers in the business. We’ve offered him a number of roles within NBC News and NBCUniversal, and we hope he’ll stay in the family.

Don leaves a big hole at TODAY, but we are so fortunate to have extraordinary producers who can step up.

We are pleased to announce that Libby Leist is being promoted to EP of TODAY’s 7am and 8am hours. Libby brings tremendous talent and experience to this role, having served as senior producer of the 7am hour for the last 5 years. She has led the show’s political coverage and special events, including candidate town halls and TODAY’s historic broadcast from inside the White House. Libby has spent her career at NBC News, starting as a desk assistant in DC in 2001, and later rising to become Andrea Mitchell’s State Department producer – a role for which she traveled the world – and then several senior producer roles in the bureau, including MSNBC’s The Daily Rundown and Capitol Hill producer.

Libby will report to Noah, and will work closely with Tom Mazzarelli who will continue in his pivotal role for the show; as well as with Jackie Levin, EP of the 9am, Tammy Filler, EP of the 10am and Matt Carluccio, EP of weekends.Please join me in wishing

Don every success in his next endeavor and congratulating Libby on her promotion.

For his part, Nash thanked his colleagues and quoted Dr. Seuss. He also explained a need for shifting his work-life balance to the “life” side.

“The balance of my love for both of them has been out of whack for too long,” Nash wrote. “The time has come for me to step away from ‘Today’ and be a better dad to my two beautiful girls. They are what matter to me most.”

“Dr. Seuss wrote, ‘Don’t cry because it’s over, smile because it happened,”‘ he continued. “I’m so glad it happened.”

Here is Nash’s email in its entirety:

For many years, I have had two families: the one at home, and everyone at TODAY.

The balance of my love for both of them has been out of whack for too long. The time has come for me to step away from TODAY and be a better dad to my two beautiful girls. They are what matter to me most.

I relished every single moment of my time on the show. I still can’t believe I had the honor to work at this storied institution for so long. I will forever cherish the unbelievable experiences and incredible people I have had the privilege to work with. It was so much fun.

TODAY is number one again, because of all of you. I hope you take a moment to bask in the glory of what you have created and accomplished. You should be so proud.

Keep soaring. I’ll be cheering you on from afar.

With love and so much respect,