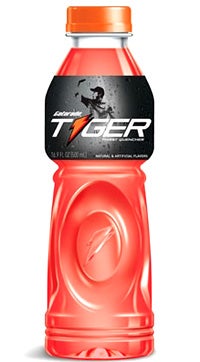 A spokesperson for Playgirl magazine told the Daily News that it has what could be nude photos of Woods, and is reviewing them with their legal team in the hopes of publishing them.

This is not insignificant. Why? Because major corporate sponsors generally tend not to like it when nude photos of athletes who endorse their products are published in pornographic magazines.

If they turn out to be legit, Playgirl publishes them, it will be a major coup for Playgirl, which already scored an exclusive nude photo shoot with Levi Johnston. It will also be a major hit on Tiger’s aggressively deteriorating image. He can pretty much kiss those Gatorade and Gillette endorsements goodbye.

Actually, he’s already lost one product in his endorsement den: Pepsi Co. said that it is discontinuing the Tiger line of Gatorade "Focus" sports drinks. Gatorade insists that the company made the decision before Tiger wrapped his Escalade around a tree.

Meanwhile, Gawker Media’s Deadspin (see personal disclosure below) published the best investigative post on the Tiger scandal I’ve seen yet. It’s a must-read, but here’s the gist: at least two of Woods’ alleged mistresses weren’t mistresses at all. They were his "event planners" — high-end madams — who arranged his extramarital trysts when he was on the road. And — shocker — Tiger may be just the tip of the iceberg in terms of their high-powered business and sports clientele.

Oh, and Us Weekly published a string of rather embarassing text messages between Tiger and Jaimee Grubbs. It’s what the kids call "sexting."

Remember to sign your scorecards or this round doesn’t count!

[Disclosure: I cover tennis for Deadspin.]