Today’s Moment of Betty is a good one, since it comes to us directly from our pals at the TV Academy’s Archive of American Television. 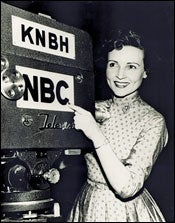 With Ms. White set to return to live TV this weekend via "Saturday Night Live," the Archive crew thought it might be interesting to hear her talk about one of her first big live gigs — working alongside the legendary Al Jarvis on his KLAC Los Angeles series "Hollywood on Television."

Forget about 90 minutes with commercial breaks. Al, Betty and the gang filled 5 1/2 hours of airtime, live, six days a week. That’s 33 hours each week. And this was before you could cut away to a pre-taped bit or commerical (Betty would often spend five minutes hyping a product via live commercials. And to think some dopes were annoyed at the non-product placement of the iPad on "Modern Family"!)

You can find the full interview, and all sorts of TV goodness, at EmmyTVLegends. The picture to the left, by the way, if from Betty’s own show on NBC’s LA station (which came after her KLAC gig).