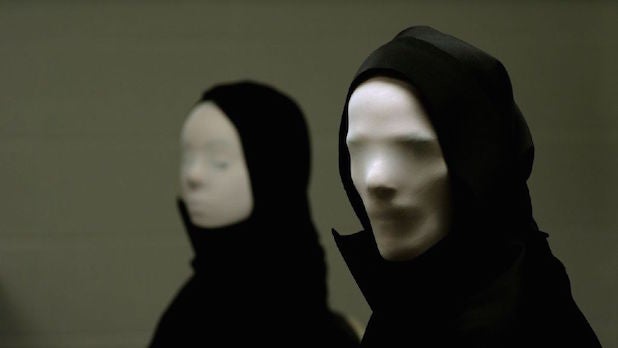 With Todd Lincoln’s short film “Gorgeous Vortex” making its debut this week as the surprise final segment of “V/H/S: Viral,” TheWrap can now exclusively unveil a new poster designed by Vance Kelly that can be found below.

“Gorgeous Vortex” is an experimental, high-fashion horror film about a woman, haunted by her past, who is on the run from an elite secret organization. The movie appears as a surprise segment after the end credits of “V/H/S: Viral.” Lincoln is also releasing micro-films that tie in with “Gorgeous Vortex” on the film’s website.

A fan of the “V/H/S” series, Lincoln set out to change things up and make a film that wasn’t found-footage to challenge audiences’ perceptions and perhaps point to a new direction in the franchise. “I set out to create a film that would feel like an evil puzzle from another dimension or an ominous transmission from the future,” said the director, who was given total creative freedom by the producers.

Drawing comparisons from critics to the work of such filmmakers as David Lynch, David Cronenberg and Stanley Kubrick, “Gorgeous Vortex” was inspired by George Lucas’ early experimental films and the writings of J.G. Ballard and Jean Baudrillard, as well as avant-garde video artists, fashion photography and old Italian horror movies.

“Gorgeous Vortex” is now available on the “V/H/S: Viral” Blu-ray, DVD and iTunes, but you have to buy “V/H/S: Viral” on iTunes in order to watch it, as it doesn’t appear after the credits if you simply rent it. A teaser for the film can be viewed here.