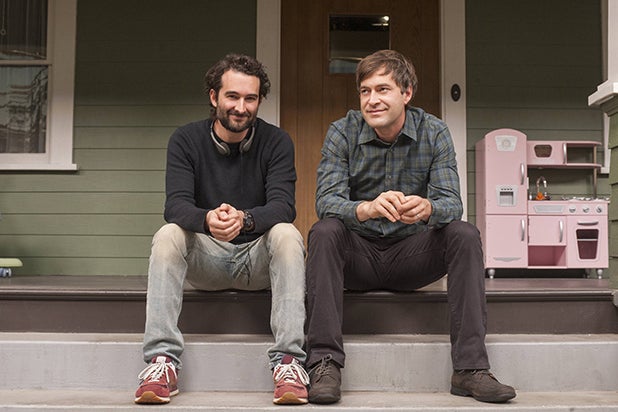 The Season 1 finale of “Togetherness” ended on one hell of a cliffhanger, making the HBO comedy’s return one of the most anticipated of 2016.

As Brett (Mark Duplass) drove to Sacramento to mend his marriage with Michelle (Melanie Lynsky), she gave in to temptation and kissed colleague David (John Ortiz).

Meanwhile, it was a sad ending for Alex (Steve Zissis) and Tina (Amanda Peet) too, as he landed the role of a lifetime and asked her to please go with him to New Orleans. She, of course, turned him down, opting to stay in her relationship with mega-successful producer Larry (Peter Gallagher).

“We knew exactly where Season 1 was going to end … [which] helped us probably sharpen everything towards that point,” Jay Duplass, co-creator and showrunner alongside his brother, told TheWrap.

Below, the Duplass brothers discuss crafting that ending, what to expect in Season 2, and what they would produce if they had no budget restrictions.

TheWrap: Can you walk us through that ending and when you knew that was how you wanted it to end?
Jay Duplass: It was originally more about Alex’s character and three surrounding characters; we re-engineered it to be four main characters, equally. It took us a long time to re-engineer that, and in doing that, we really developed the full arcs of Seasons 1 and 2. So we knew exactly where Season 1 was going to end … [which] helped us probably sharpen everything towards that point. We’ve had so much positive and pissed-off feedback about leaving people hanging for a year. The tricky part is that it’s made it very difficult for us to talk about Season 2 because everything hinges upon that cliffhanger.

What can you say about where we pick things up in Season 2?
MD: We want to be very careful with the spoiler nature of it, obviously. People have been waiting so long to see what happens, we don’t want to blow it for them before they have the chance to get there. One thing that’s been really exciting for us in Season 2 is watching the relationship of Alex and Tina flip a little bit on its head. See Alex get his stroke on a little bit, as we call it. Getting in shape, get some success as an actor, he gets a girlfriend, and Tina sort of having to see that — and seeing her face was sort of fun for us. Just in general, we sort of laid out who these characters are last season. We were able to light the fuse of the powder keg we slowly built over the season, so it was fun to stretch a little bit and let it become a little more explosive.

You’ve said before you would like to see the show run for several seasons. How much of that is planned out and do you know how it all ends?
JD: I wish we did. [laughs]

MD: Yeah, we’re not that smart.

JD: We had our first two seasons well planned, and now we’re sort of off the map and just allowing ourselves to explore more of the general soup of our lives and our friends’ lives. Another element of it now which is exciting and new for us, we have these four characters who are incredibly well-defined, and now they sort of tell us more than anything what they want to do and where they want to go. That’s been new and exciting and fun to explore in the writers’ room. Sometimes we’ll just be confused as to where to go, and what will solve it is just going, “Well, what would she do if she walks in the room and experiences this thing?” We’re kind of living in an open universe right now.

How have the actors impacted where you take these characters?
MD: A lot of it is about the interpersonal chemistry and energy between these four characters, which is not just between the two couples Brett and Michelle and Alex and Tina, but also between the girls and the two boys. In particular, we found that audiences really responded to the sweetness in which Alex and Brett deal with each other. Which is very normal to us, I guess we’re just super huggy and lovey with our buddies, but apparently this is not normal. So that was really fun to play with and to watch the two girls, who are so diametrically opposed in personality styles, find ways of intimacy and where they won’t be able to connect ever, maybe. It’s a lot of us following our bliss of what we want to see them do. And then playing off of the natural interpersonal dynamics that we saw the first time.

What have you learned about doing TV?
JD: Definitely learned a ton about making television — this was our first foray. The primary thing we learned was not to close storylines the way you do in feature filmmaking. Longform TV is very akin to real life; it’s sort of what Mark and I have been trying to do with our filmmaking all along. Anything can happen, you don’t need to close storylines, so it involves less artifice with the craft. And the other thing we learned, and that we’ve enjoyed, is that you can be a lot more subtle on TV, which is funny because I feel like TV is known for being the opposite of that. The thing we experience in life is that things are not overly dramatic, and things often happen in really small ways. Breakups usually don’t happen down by the river with beautiful lighting. The moment you realize your relationship may be over might happen in Aisle 11 of Rite-Aid and the person you’re with has disregarded your feelings and your needs by bringing you the wrong toothbrush again for the fourth time. And you know it’s the beginning of the end. Getting to know your characters so intimately allows you to be much more subtle, and sometimes not just with the drama but with comedy.

You’re on HBO, you have a deal with Netflix, you’re still making movies — how have all these new avenues opening up impacted the way you create?
MD: We never really planned on being producers and we never really planned on making as much stuff as we ended up making, but we found all these wonderfully supportive places. What we realized is that we like playing in a very particular corner of the sandbox. We like making very small, very personal, very specific things. A lot of times what that means is you just have to struggle and bang your head against the wall, but now we have these big companies that are well-funded, who really like what we do and want to support what we do. It’s kind of been a dream where we’re getting to make things exactly the way we want to make it, and we can also pay our cast and crew really well and we don’t have to starve either. So we’re in a very particularly sweet spot right now and we’re well aware it may not last forever, so we’re just trying to live it up.

What would you make if you were given no budget restrictions?
JD: The same shit we’re making now.

MD: It’s kinda crazy to say, but the way Jay and I stay afloat, because we don’t make particularly commercial fare that makes a lot of money, is that we make things cheaply and we make things small. We would kind of be afraid to go make a $100 million movie because you have to do certain things to it to have it make its money back. But we stay in our little corner of the sandbox. If they’re successful, great, but if they’re not that successful, it’s not that big of a deal because they didn’t have to do that much business to make their money back. We’re well aware of backing into the right model to keep ourselves creatively sustainable.