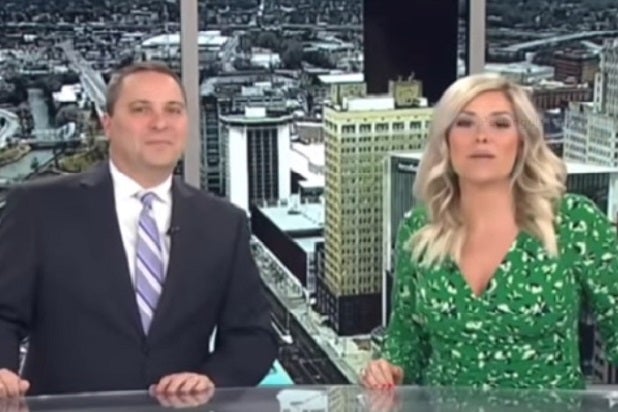 Holy Toledo did WTOL spark a lot of criticism Wednesday, after a video of members of its news crew spouting youth-skewing slang went viral on social media.

But the Toledo, Ohio, CBS affiliate offered an explanation for the video on Thursday, saying that the clip was “admittedly ‘cringe-worthy,'” but made for a good cause: to “encourage students to show up and be ready for” state testing that’s taking place for Toledo Public Schools students this week.

The video sent “Toledo” into the trending topics on Twitter on Wednesday night, thanks to a number of eyebrow-raising lines dropped by the news-crew members.

Such as, “Good morning, TPS students, it is testing week, and it’s time to slay all day.”

And, “Stay woke, be on fleek, and get that Gucci breakfast.”

A number of members of the Twitterati reacted as one might expect.

“My hometown of #Toledo is trending on Twitter. At first I was like ‘oh my God, was there an awful disaster or emergency?!’ Turns out, it was so much worse….,” wrote one critic of the video.

“Toledo is no longer part of Ohio,” another voice chimed in.

“As if Toledo doesn’t already have enough to be embarrassed about,” lamented another Twitter user.

“Not a great look for Toledo,” another voice weighed in.

“Yes this is real. Toledo is cancelled,” wrote another commenter.

“TPS has had two consecutive failing grades on the Ohio state report card,” the article noted. “800 TPS students were absent during the 2018 Ohio state test.”

WTOL went on to say, “There are fears that a third consecutive failing grade could lead to a state takeover of the district.”

“The intent from the very beginning was to help TPS students take the tests and to get the district the funding it needs,” WTOL general manager Brian Lorenzen explained. “This was one of several messages provided by area leaders and media outlets meant to show support and provide encouragement.”

“It’s all about the kids and being relatable to them. We wanted to do something encouraging and fun,” added WTOL Morning Traffic anchor Steven Jackson. “By doing this, not only are we empowering students, but we’re strengthening our community.”

The station added that “cringy moments” aside, teachers who showed their students the video reached out to the station, including one who “told us that her students asked to watch it a second and even a third time.”

Watch the video, and read some of the comments it generated, below.

My hometown of #Toledo is trending on Twitter. At first I was like “oh my God, was there an awful disaster or emergency?!” Turns out, it was so much worse…. https://t.co/MCzgjPd4kx

Toledo is no longer part of Ohio https://t.co/CIQMZcZw3E

As if Toledo doesn’t already have enough to be embarrassed about https://t.co/cqufasT65e

Yes this is real. Toledo is cancelled. pic.twitter.com/TikY1tpc3x