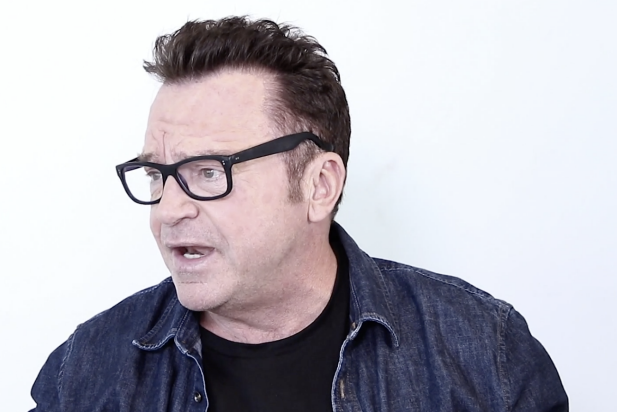 Tom Arnold has filed battery charges against Mark Burnett a day after he accused the Apprentice creator of “choking” him at an Emmy’s party, the LAPD told TheWrap on Monday.

“Mark Burnett just went apesh– & choked me at this huge Emmy party then he ran away with his torn Pink shirt & missing gold chain. I’m waiting for LAPD,” Arnold wrote in a Sunday tweet.

Another side of the story came from Burnett’s wife Roma Downey, who said that Arnold had ambushed her husband and left her with a bruise on her hand. Downey suggested the alleged altercation was related to Arnold’s upcoming show on Viceland “The Hunt for the Trump Tapes with Tom Arnold”

“Got this bruise tonight when Tom Arnold tried to ambush my husband Mark and me at a charity event. Is your TV show worth it Tom?” she said. “Please stop.”

Vice Media declined repeated requests for comment on Arnold’s accusation or whether it would affect the show’s premiere date on Tuesday.

Got this bruise tonight when Tom Arnold tried to ambush my husband Mark and me at a charity event. Is your TV show worth it Tom?Please stop pic.twitter.com/lXvuKjIMI2

Arnold called Downey a liar and said that in addition to filing a report with the LAPD, he would also bring legal action against her for “defamation.”

“You lie your crazy husband attacked me you psycho. I’m filing police report & suing you for defamation,” he said.

TheWrap has reached out to reps for Arnold and Burnett.