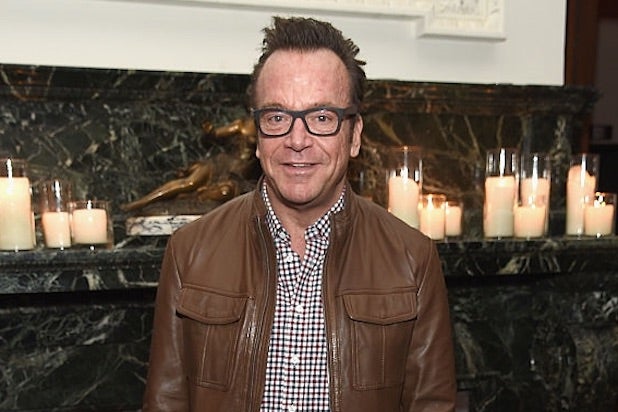 Tom Arnold has quickly learned that Donald Trump supporters don’t pull their punches when it comes to defending the president-elect.

Since posting a challenge to gamers Thursday evening to hack into Trump’s unreleased tax returns and archived tapes of “Celebrity Apprentice,” the actor/comedian has been hit with some pretty tough blows coming from The Donald’s proponents. Not that Arnold is one to button his lip and sit down in the corner. Nope.

Arnold believes that tapes exist showing Trump using racial slurs and other offensive language — though no tapes have emerged.

Here are just a few of the not-so friendly comments tossed in his face… only for Arnold toss a few zingers right back.

and yet I'm still better than your pathetic ass. #sad https://t.co/0mUaWY4eFa

No one supports hacking, Mr. Arnold. Sadly, I don’t believe Obama. I mean sanctions w/o evidence? After the election? What if Hillary won? https://t.co/d8YWOfcHnf

Do you believe McCain? Saw the evidence. You & I haven't seen what they have but it's a problem. Swear I'd feel the same way if Hillary won. https://t.co/nfcAoAZcoX

Liberals think if they tweet enough their socialist granny can still win. https://t.co/ar08laBhSb

She's done. Concerned about Putin. Do you like boiled potatoes? He doesn't eat them but 95% of Russian people do everyday. I'll keep America https://t.co/5KHdlAa4b6

@TomArnold Honestly, you should show them or just stop talking about it. It’s just starting to look like you’re trying to make publicity.

Who goes 2 Twitter 4 publicity? Only morons. Me & DT. BTW it's also a good place to get expert unofficial help. Even got DM's from Russians https://t.co/Qx9ZxDrFmY

@truthseekingiam @TomArnold Nope. He’s not a conman. Grow up. Clue? His kids. His employees.

I've known him 25 years. Worked, done business with him. Tell me about your personal experience with Donald Trump. https://t.co/9MoFTnW3iP

First! That's a good one & I'm actually related.Was a good soldier til he transferred 2 Michigan.Good luck in Final 4. U got 1st but Bama.. https://t.co/YwpFNYf6Kj

@dreamwithfaith @TomArnold Do you not understand how impeachments actually work or what is required for them to actually happen?

lying to congress. Treason? Making deals with foreign foes at America's expense and risk our men and women in uniform? https://t.co/AA8mn4aivi

@TomArnold I hope you are right, what about releasing the recording of trumps attorneys threatening you? It’d show he has something to hid

@TomArnold I think Trump has dementia. Hence no press conferences and always has his daughter around. Short term memory loss too

Executive Producer of Apprentice told me it was difficult 2 work with Trump cause only remembers last 5 seconds of what anyone says 2 him. https://t.co/B8ENAGqMVx

Strangers on Twitter are mocking you because you’re a joke.
Your place is on the Hollywood D-List
You are irrelevant, fade into obscurity. https://t.co/Hbg0DrQZPz

@TomArnold He just made it by pinning tweet praising his buddy Putin. ???” We’ve definitely entered the Twilight Zone. #frightening #terrifying

Trump won. Why aren't his voters concerned 4 USA Russia interfered with our election? If U were patriots U would be. Could BU next. Cowards. https://t.co/bt8Fe0WWJ5

One of that last bummer realizations of 2016 is that I would totally vote @TomArnold for president.