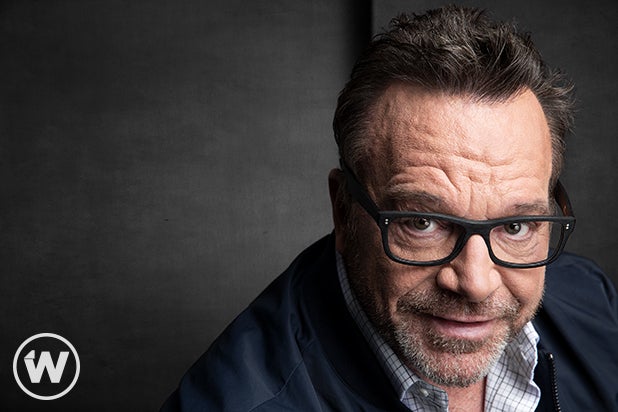 Arnold spoke to the “Shoot This Now” podcast about his new show “The Hunt for The Trump Tapes.” You can listen on Apple or right here.

Arnold filed battery charges against Burnett last month after accusing the “Apprentice” executive producer of choking him at an Emmys party.

Burnett’s wife, Roma Downey, said that it was actually Arnold who ambushed her husband at the event. She tweeted an image of her hand, which she said was bruised.

“Got this bruise tonight when Tom Arnold tried to ambush my husband Mark and me at a charity event. Is your TV show worth it Tom?” she wrote. “Please stop.”

In his interview with “Shoot This Now,” Arnold called the photo a “bulls— picture of a fake bruise.”

Arnold has pursued Burnett for months, accusing him of concealing damaging tapes of Trump from his years hosting “The Apprentice.” Arnold said he has friends who worked on the NBC reality show for all 15 seasons of its run — and that they recorded now-missing footage of Trump sexually harassing employees and using the N-word.

Mark Burnett does not own The Apprentice or its footage. MGM Studios owns The Apprentice and all its materials, including all footage.  Mr. Burnett is an employee of MGM and does not personally have the right to release unused footage from The Apprentice. While MGM owns all footage, various contractual and legal requirements also restrict MGM’s ability to release such material.

Despite the level of detail Arnold describes, he said he cannot reveal the names of the sources who told him about the contents of the tapes.

Arnold is not alone in his contention that Trump has been recorded saying the “N-word” — or in his inability, so far, to provide proof. Former “Apprentice” contestant and White House aide Omarosa Manigault-Newman said in August that she has heard “the tape,” without producing it.

Arnold is also searching for other damaging tapes that he believes exist, including one of Donald and Melania Trump in an elevator in Trump Tower. We talked about it at length for the podcast, though he was cagey about what he professes to know about a Trump elevator tape.

For some, Arnold’s failure to produce any Trump tapes relegates his show to the category of entertainment. But he says at the conclusion of our interview: “This isn’t a bulls— reality show no matter what these a–holes think.”