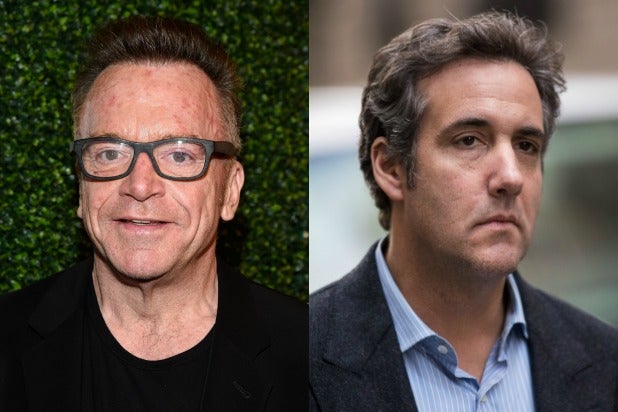 Tom Arnold has posted a photo to Twitter of himself with ex-Donald Trump attorney Michael Cohen, and the actor tells NBC News that the two met in Manhattan to discuss their now-mutual enemy.

Roseanne Barr’s ex-husband says Cohen — who is under investigation by federal prosecutors ― talked to him for a Viceland show he is filming where he searches for damning audio and video tapes of Trump. The show is expected to air later this year.

“We’ve been on the other side of the table and now we’re on the same side,” Arnold told NBC News. “It’s on! I hope he [Trump] sees the picture of me and Michael Cohen and it haunts his dreams.”

Here is that photo:

Arnold told NBC News that he was in New York taping interviews for the Vice show and that he and Cohen met at the Loews Regency Hotel in Manhattan. The comedian would not say whether Cohen was handing over any of the Trump tapes that Arnold is in search of — but the lawyer certainly has ‘em.

Cohen has previously admitted to paying $130,000 to adult film star Stormy Daniels — who said she had an affair with Trump — just before the 2016 presidential election.

The ex-Trump Organization VP is under federal investigation for bank fraud, wire fraud and campaign finance violations, in part due to the alleged Daniels hush money.