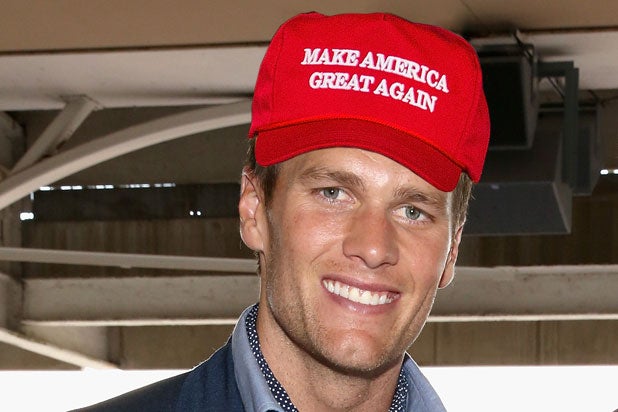 Barstool Sports writer John Feitelberg tweeted a picture of what appears to be Brady’s locker. Inside it is a red baseball cap with the GOP frontrunner’s campaign slogan.

The picture was accompanied by the caption,”Tom wants to make American great again.”

Trump has repeatedly appeared in public wearing a similar hat since announcing his presidential bid in June.

After a federal judge overturned the NFL’s four-game suspension of Brady this week, Trump publicly came out in support of Brady, tweeting: “Congratulations to Tom Brady on yet another great victory- Tom is my friend and a total winner!”

Congratulations to Tom Brady on yet another great victory- Tom is my friend and a total winner!

U.S. District Court Judge Richard Berman said on Thursday that the NFL’s penalty against Brady did not have significant legal standing.

Brady has insisted he is innocent of a conspiracy to deflate footballs during the AFC Championship Game last season.

Also Read: Jimmy Kimmel Says Matt Damon Is 'Holed Up in a Bathroom' With Picture of Tom Brady

But NFL Commissioner Roger Goodell said on Thursday that the league is appealing the ruling “in order to uphold the collectively-bargained responsibility to protect the integrity of the game.”

Brady is set for a season-opening matchup with the Pittsburgh Steelers in Foxborough this Thursday.