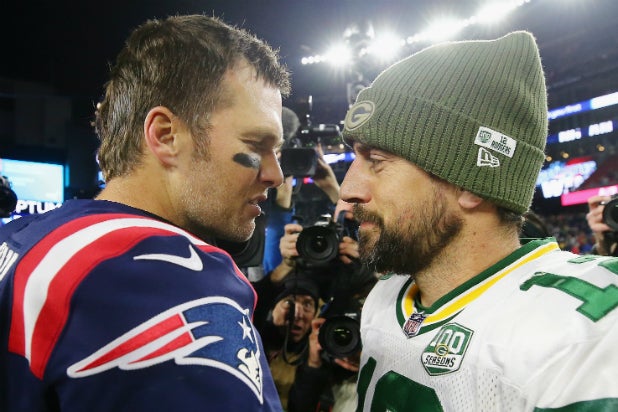 The rest of TV never had a chance. NBC dominated Sunday night with its marquee Tom Brady vs. Aaron Rodgers primetime NFL game.

Due to the nature of live sports, the below fast-national ratings for NBC and Fox are subject to significant adjustment. That said, the earlier metered-market ratings, which are adjusted for the different time zones, have last night’s New England Patriots-Green Bay Packers game as the highest-rated Week 9 game in the 13-year history of “Sunday Night Football.”

NBC was first in ratings with a 5.4 rating/20 share in the advertiser-coveted 18-49 demographic and in total viewers with an average of 17.6 million, according to preliminary numbers. That was all the network’s pregame show, “Football Night in America,” and the game itself, which the Pats won 31-17.

CBS and ABC tied for third in ratings, both with a 0.8/3. CBS was third in total viewers with 7.4 million, ABC was fourth with 3.9 million.

Telemundo was fifth in ratings with a 0.6/2 and in viewers with 1.6 million.

Univision was sixth in ratings with a 0.4/1 and in viewers with 1.3 million.