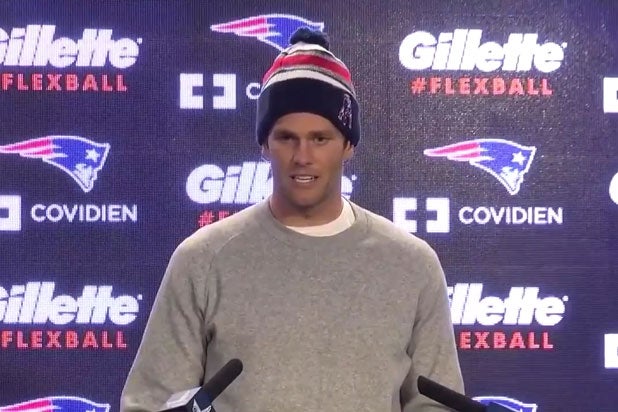 Broadcasts were interrupted and oceans parted as Tom Brady addressed the media over allegations that the New England Patriots used tainted footballs in Sunday’s AFC Championship Game against the Indianapolis Colts.

In fact, all three major cable news networks broke away to carry the press conference.

Patriots quarterback Brady was vehement that, following initial inspection before an NFL game, he doesn’t “want anyone touching those balls after that. I don’t want anyone rubbing them,” he said. “To me, those balls are perfect.”

His commentary alone provided sufficient comic relief, but Twitter users famous and otherwise were still inspired to mock the face of Deflategate.

C’mon people. Do you really think a guy like Tom Brady would have any life experience with, or need for deflated balls?? #Giselle

While Josh Groban decided to go the sanctimonious route.

The only thing I’ve ever had deflated in MY job is my ego.

Jimmy Kimmel sought instead to try to inhabit the mind of Tom Brady.

“I wish people would stop talking about my balls and instead focus on my beautiful face” — Tom Brady — Jimmy Kimmel (@jimmykimmel) January 22, 2015

Dear Tom Brady. Please let’s do a “check your balls” campaign for cancer and all is forgiven. — drew olanoff (@drew) January 22, 2015

Cute, but it was NBC’s Pro Football Talk that issued the funniest tweet of the day on the subject.

Tom Brady really went ISIS? “Go ahead and cheat, fellas. As long as no one loses a head, we’re good.” — ProFootballTalk (@ProFootballTalk) January 22, 2015

This has gone from a serious presser to an SNL skit in a matter of minutes. #DeflateGate #Balls — Ryan Parker (@TheRyanParker) January 22, 2015

If nothing else, this entire incident has proven that at heart, we’re all children who snicker at the word “balls”. #DeflateGate — Ryan Parker (@TheRyanParker) January 22, 2015

The sentiment wasn’t lost on CJ Werleman, who noted his favorite “balls” combinations from the media conference.