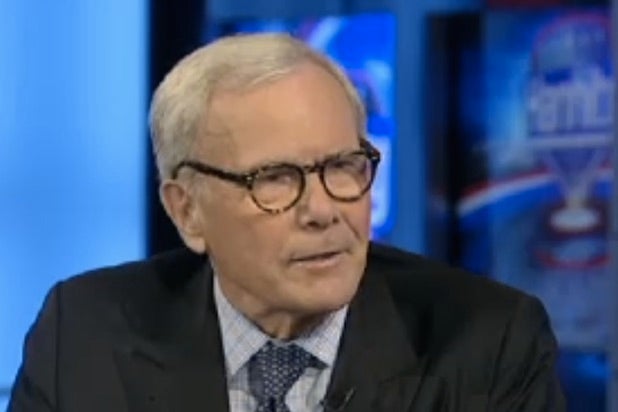 Tom Brokaw on Sunday issued a series of tweets appearing to walk back remarks he made on NBC’s “Meet the Press” about Hispanic assimilation in the U.S. and some Americans’ fear of “brown grandbabies” — though he stopped short of an actual apology.

“I feel terrible a part of my comments on Hispanics offended members of that proud culture,” the veteran newsman began, noting that “from my days reporting on cesar chavez to documenting the many contributions of hispanics in all parts of our culture … i’ve worked hard to knock down false stereo types.”

“If @tombrokaw‘s intent was to apologize, this is not an apology,” media writer Yashir Ali noted Sunday night.

Brokaw had come under fire for his comments on the issue of Hispanic immigration on the NBC Sunday show.

“The fact is, on the Republican side, a lot of people see the rise of an extraordinarily important new constituent in American politics — the Hispanics — who will come here and all be Democrats,” he said on the show. “Also, I hear, when I push people, ‘I don’t that I want brown grandbabies.’

“That’s also a part of it,” he said. “It’s the intermarriage that’s going on, and the cultures that are conflicting with each other.”

Then Brokaw headed into the issue of assimilation — particularly about language. “I also happen to believe that the Hispanics should work harder at assimilation,” he said. “They ought not to be just codified in their communities but make sure that all their kids are learning to speak English and that they feel comfortable in the communities. And that’s going to take outreach on both sides, frankly.”

Tom Brokaw: "The Hispanics should be working harder on assimilation. They should be making sure their children learn English."

Meanwhile, many of the white people in America can barely speak english, read, or write.pic.twitter.com/EWQPbw6Xgm

Fellow “Meet the Press” panelist and PBS correspondent Yamiche Alcindor pushed back on air: “The idea that we think Americans can only speak English, as if Spanish and other languages wasn’t always part of America, is, in some ways, troubling.”

Journalist Julio Ricardo Varela commented online, “It really was a punch in the gut to a lot of people. It was not only factually incorrect, it was also xenophobia in action.”

But with that said, what @tombrokaw said on national TV today was hard to watch and absorb. It really was a punch in the gut to a lot of people. It was not only factually incorrect, it was also xenophobia in action. Hope @MeetThePress addresses this.

As the online backlash to Brokaw’s remarks built, the veteran newsman attempted to address the backlash in a series of tweets — ending with an appeal about “finding common ground – which I strongly believe dialogue not division.”

i’ve worked hard to knock down false stereo types. in my final comment in Meet i said ALL sides hv to work harder

at finding common ground – which i strongly believe
dialogue not division