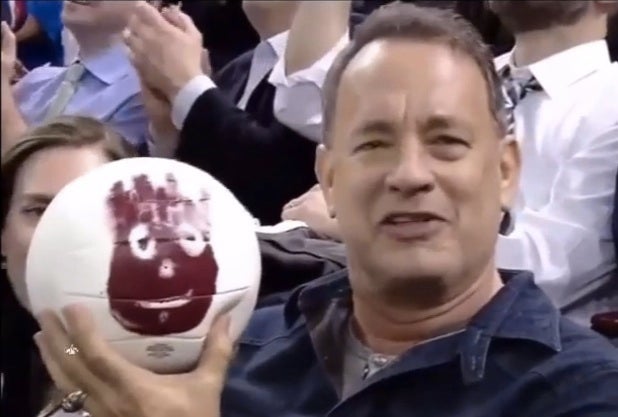 Tom Hanks had a reunion of sorts at Thursday’s New York Rangers game when the volleyball that became famous in “Cast Away” was thrown his direction.

Hanks was shown on the Jumbotron screen when someone threw him “Wilson” — the volleyball he found on the fictional island he was stranded on after his plane crashed in the 2000 film “Cast Away.”

The actor seemed to like the Rangers’ in-house entertainment surprise, looking down at the much-cleaner version of the volleyball and showing it off to fans. He then chanted, “Let’s go Rangers!”

The beloved volleyball, which Hanks talked to like a BFF while being stranded on an island for years in “Cast Away,” helped win him a 2001 Golden Globe for Best Actor.

Luminaries from the music, film and television worlds celebrate a record-industry mogul at the premiere of "American Masters: Inventing David Geffen"

Portrait of the mogul as a young man: A still from "American Masters: Inventing David Geffen"
View In Gallery