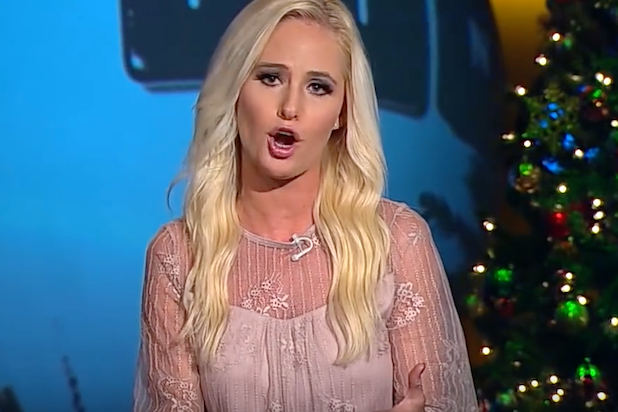 The Blaze has suspended Tomi Lahren for a week after the conservative commentator made pro-choice remarks, the Daily Caller reports, citing multiple sources.

The Blaze founder, Glenn Beck, mocked the network’s biggest star earlier on Monday after she mentioned having “moderate, conservative and libertarian views” on Twitter while defending recent pro-choice comments made during an appearance on “The View.”

The Daily Caller reported the suspension is for “at least one week,” beginning this evening. Although The Blaze did not immediately respond to TheWrap’s request for comment, they did post this tweet:

Lahren has not responded to the Daily Caller’s report, but a cryptic tweet from earlier on Monday indicates there is truth to the report.

No one hunts small deer ???? this too shall pass. #mondaymotivation

Lahren, who is a rising star among conservative media, tweeted over the weekend that she “will never apologize, to anyone, for being an independent thinker,” on the heels of the far right attacking her for admitting she supports women having the right to choose. Beck doesn’t appear to appreciate Lahren’s comments and responded on Twitter.

Wait, libertarian views? Help me out on Trumpcare, stimulus, and executive orders. Trump is anything but libertarian. #intellectualhonesty https://t.co/jlt5sFvQMP

Until Friday’s appearance on “The View,” nobody would have ever accused Lahren for not being conservative enough. She is an outspoken Trump supporter who often refers to liberals as “snowflakes” while mocking them in viral videos.

Beck addressed the situation on his radio show Monday, calling it a “dustup.”

“I don’t hire people who are sycophants or don’t have my opinion. I try to hire people who have a different opinion because I believe in being intellectually rigorous. I don’t want strawmen. I want people to have a real argument on the other side so we can learn from each other, and we can grow,” he said.

Also Read: Watch a Reporter Explain to Sean Spicer Why There Are No Hillary Questions (Video)

The Blaze founder continued: “So let’s learn from each other and grow, shall we? What is the constitutional argument for conservatives on life? A lot of people will think that this is a new argument. That founders never — they never discussed this, you know? Abortion is a new idea. And if it’s not abortion, women’s rights is a new idea. Well, I want you to put women’s rights into context here. Women’s rights are important, however, they’re not the only thing to consider when another person’s life is at stake. We have to — we have to consider the other person’s life when it is at stake.”

Beck went on to say that he “would disagree that you’re a hypocrite if you want limited government and yet you want the government to protect life of the unborn.”

“It’s very, very clear. But it takes intellectual honesty, and it takes a willingness to actually think these things through and to do more than just read Twitter or Facebook to get your news and your political opinions,” Beck said. “Speech is not free. It comes with another cost and usually to the other people at the other end of your argument. The pen is mightier than the sword, and it can destroy people if your aim is clicks, views, and ratings… For Tomi, this seems to be a relatively recent change.”