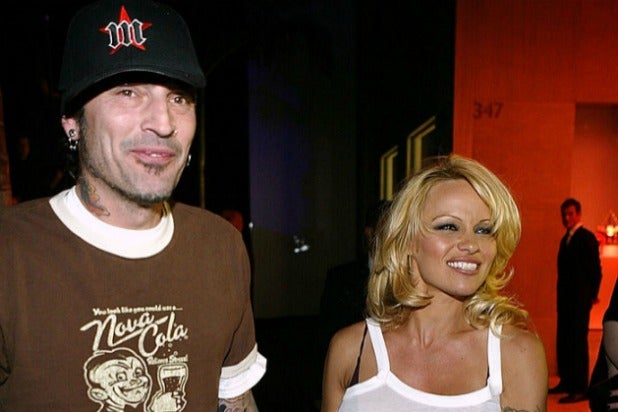 Pamela Anderson has weighed in on the drama unfolding between her ex-husband Tommy Lee and their son Brandon, saying that the former Motley Crue drummer is “a disaster spiraling out of control.”

In a blog post Thursday, Anderson also called Lee’s actions “desperate and humiliating” and accused him of engaging in a “Trump style” rampage.

In the post, titled “Alcoholism Is the Devil,” Anderson says that their son was “putting together an intervention (along with friends and people Tommy works with and admired).” Anderson also said, “I will never talk to Tommy again before he is sober and in his right mind, adding that it’s “impossible to reason with crazy.”

On Tuesday, Lee tweeted that his son “knocked him unconscious” in the drummer’s bedroom.

“My fiancé and I were in bed when my son busted into the room and assaulted me. I asked him to leave the house and he knocked me unconscious. He ran away from the police. THAT’S the truth.”

But in her post Thursday, Anderson said that the younger Lee “punched him in the nose for all of us who he has hurt – Now Tommy feels humiliated – and is attempting to destroy his own son.”

In a tweet Wednesday, the Motley Crue drummer denied that an intervention had been arranged, and said that he only has “a few drinks here & there.”

“LMAAAO!!!! I’m happier than I’ve been in my entire life. I have a few drinks here & there because I’m f—kin retired and enjoying my life,” the elder Lee wrote. “I worked 30+ f—in years I deserve it. You didn’t arrange any intervention, you barely spoke to me while u were here. Just coverin ur ass!!”

LMAAAO!!!! I’m happier than I’ve been in my entire life. I have a few drinks here & there because I’m fuckin retired and enjoying my life. I worked 30+ fuckin years I deserve it. You didn’t arrange any intervention, you barely spoke to me while u were here. Just coverin ur ass!! https://t.co/gYHHDX9R5E

Happy Birthday, Pamela Anderson, the blonde bombshell whose beauty has stood the test of time