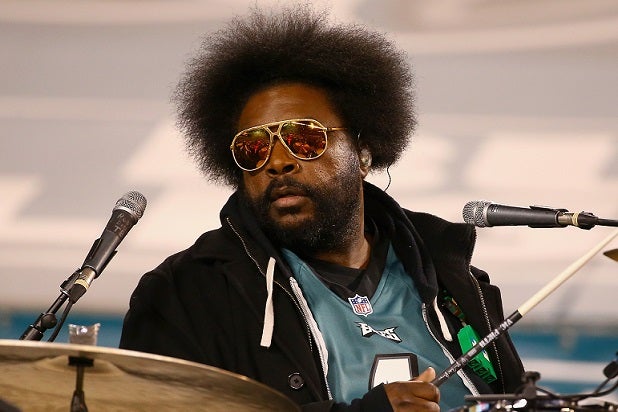 NBC has been slapped with a lawsuit by two men who allege that they were fired as camera operators on “The Tonight Show Starring Jimmy Fallon” because they are white.

In the lawsuit filed in New York Supreme Court on Wednesday, Kurt Decker and Michael Cimino also allege that Questlove (above), the drummer of “Tonight Show” house band The Roots, demanded their firing.

Decker and Cimino say that they had more than 40 combined years of “spotless” employment at NBC. However, they say, on June 19, 2017, while working on “The Tonight Show,” they received an “unsolicited racist and misogynist text” from a show stagehand, as did Roots member Mark Kelley (identified as “Mark Kelly” in the lawsuit).

Also Read: Questlove Says It's 'F--ed Up' Not to Care About the Environment (Video)

The duo reported the text to Roots manager Keith McPhee and NBC technical production manager Bryan King, the suit says. After which, according to the complaint, “Plaintiffs, who are both Caucasian, were both immediately suspended for having received the unsolicited text message,” while Kelley, “who is African-American, was not.”

“Simply put, Plaintiffs were terminated because they are Caucasian,” the suit continues.

In a statement to TheWrap, an NBC spokesperson said, “NBC is committed to providing a work environment in which all individuals are treated with respect and dignity. We have strong policies in place that protect against discrimination in any form. The decision about these plaintiffs was the company’s alone.”

In a statement on behalf of the musician, Questlove’s spokeswoman told TheWrap, “Questlove denies the ridiculous allegations made in this lawsuit. Racism is REAL and exists throughout the world and for these gentlemen to claim victim is not only disrespectful to Questlove and his band mates, but to all that truly endure racism on a daily basis.”

The statement concluded, “As NBC already stated, the decisions made regarding these employees were made by NBC, alone.”

The suit seeks unspecified damages, but says that the Plaintiffs are believed to have suffered injury “in excess of $1 million each.”

President Barack Obama takes the cake for the best feature on Jimmy Fallon's popular segment. Obama reflected on his tenure at the White House, but wasted no time to throw in references about Beyonce's "Lemonade" and mock Republican presidential candidate Donald Trump.
He also sealed the deal by dropping the mic -- twice -- at the end of the segment.
View In Gallery