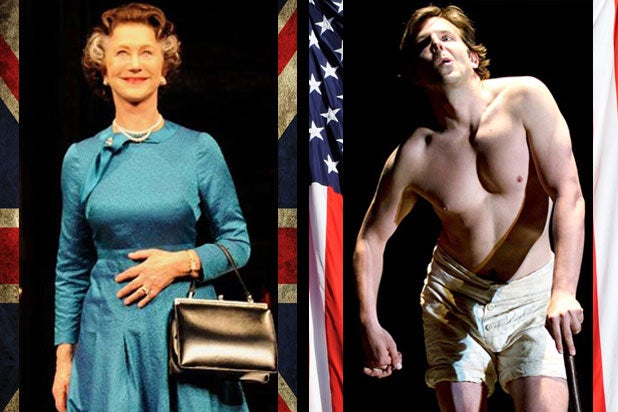 CBS’s Tony Awards telecast on June 7 will be a race of the Brits and the Yanks.

Let’s start with the U.K.

Simon Stevens’s “The Curious Incident of the Dog in the Night-Time” and its director, Marianne Elliott, look good to win for original play and direction. Why? Because it’s a very big play with splashy direction, making its closest competition another entry from England, “Wolf Hall” and its director, Jeremy Herrin. It helps, too, that “Curious Incident” will tour America, which the Tony voters always like.

Helen Mirren has never won a Tony, but she probably will this year for her performance in “The Audience,” once again playing Queen Elizabeth II after her Oscar win for “The Queen.” Fellow Brit and Broadway deb Carey Mulligan, in “Skylight,” is her biggest rival.

Wide open is the race for best actor in a play. Will Tony honor a big movie star, like Bradley Cooper giving a flashy performance in “The Elephant Man”? Or a mere movie star such as Bill Nighy giving a flashy performance in “Skylight”? Or will the award go to newcomers Alex Sharp and Steven Boyer, both giving equally flashy performances in, respectively, “Curious Incident” and “Hand to God”? All this over-the-top acting may hand the Tony to Bill Miles, delivering an extremely understated performance as Thomas Cromwell in “Wolf Hall.” Then again, the voters could award one of those other Brits, Sharp or Nighy, with Nighy having the edge due to his Broadway-vet status.

David Hare’s “Skylight” will win for best revival of a play. Duh. It’s the only nominated play in this category that’s still running on Broadway and, of course, it’s British.

At least, the Tony nominating committee believes that Americans know how to put on musicals.

“Fun Home” should be cited as best musical, although the out-of-town presenters are expected to vote for “An American in Paris,” a potential box office behemoth that will excite their subscribers when the show tours the U.S. next year and beyond.

A less competitive race is the one for best book and score, which will go to Lisa Kron and Jeanine Tesori for “Fun Home.”

Michael Cerveris, playing a tortured father, looks to be another “Fun Home” win, for best actor in a musical.

Despite all those expected “Fun Home” wins, its director, Sam Gold, is hardly a lock to be proclaimed best director. His best chance for winning is if the voters feel that giving the best choreography Tony is enough for “An American in Paris” director Christopher Wheeldon. Otherwise, Wheeldon could well take home two Tonys.

Best actress in a musical is almost as difficult to call as best actor in a play. As with the other tuner categories, it’s a contest among the Americans: Kristin Chenoweth in “On the Twentieth Century,” Kelli O’Hara” in “The King and I,” and Chita Rivera in “The Visit.” Since it’s a three-way toss-up, the Tony might go to O’Hara, because she is oft-nominated and has never won. But don’t bet on it.

Lincoln Center Theatre’s looks likely to win for best revival of a musical, although voters might take pity only the only nominated commercial production in this category, “On the Town,” even though this particular Tony means nothing at the box office.

I’ll skip the minor awards, except to comment on best featured actor in a play. This category best exemplifies the Tony nominating committee’s Anglophia when it comes to plays. The U.K.’s Michael Beard, nominated for “Skylight,” gives a credible, if slight manic, performance in the Hare drama. But really? Beard is better than these overlooked Americans, who give far more understated, nuanced performances: Bob Balaban in “A Delicate Balance,” Josh Radnor in “Disgraced,” David Rasche in “The Country House,” and Will Brill, who turned a nothing role in “You Can’t Take It with You” into a comic gem?

These four American actors made the error of appearing in shows that have already closed. Next season, might it be suggested that the Tony nominators take notes after each and every performance. Any critic can show them how it’s done: Just circle an actor’s name and write “very good.” It will help you to remember worthy performances come Tony-nominating time.