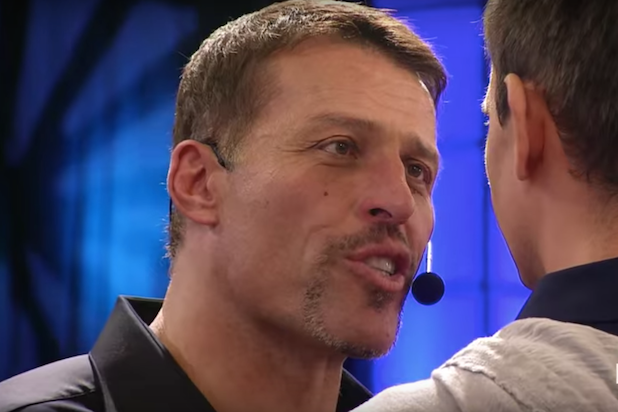 Simon & Schuster has pulled the upcoming self-help book “The Path: Accelerating Your Journey to Financial Freedom,” which Tony Robbins co-authored with Peter Mallouk, after accusations published by BuzzFeed earlier this month that he had sexually harassed both fans and staffers.

The publisher confirmed that it had scuttled a planned July 23 release of the book. As of Thursday morning, all references to the book disappeared from its website and, over at Amazon, those looking for it were met with a cryptic book description. The book was also MIA at Barnes & Noble.

“For more than 37 years, millions of people have enjoyed the warmth, humor, and the transformational power of Mr. Robbins’ business and personal development events,” the cached Amazon page reads. “He is one of the nation’s top life and business strategists. He’s called upon to consult and coach with some of the world’s finest athletes, entertainers, Fortune 500 CEOs, and presidents.”

According to a Robbins spokeswoman Jennifer Connelly, “‘The Path: Accelerating Your Journey to Financial Freedom’ was a book to be written by Peter Mallouk with contributions from Tony Robbins. As Mr. Mallouk has publicly stated that while his book was in the works, contractual terms were never reached nor finalized with its planned publisher. It is a false and misleading characterization to state that this was a book authored by Mr. Robbins.”

Mallouk and Robbins previously collaborated on another financial advice book, “Unshakeable : Your Financial Freedom Playbook,” which was published in 2017 with cover art that put Robbins as lead author “with Peter Mallouk.”

Mallouk did not immediately respond to request for comment, but in a statement, he said his wealth-management company Creative Planning had ended its relationship with Robbins and that the book had been postponed. “We’ve been negotiating an exit for six months,” Mallouk said in the release. “The parting between Tony and Creative Planning was imminent regardless and it was a mutual decision and amicable.”

Connelly added, “After several months of negotiations, Creative Planning and Mr. Robbins recently ended their professional business association that began in 2016. This decision was amicable and predated any of the recent false reporting from BuzzFeed.”

In BuzzFeed’s original report earlier this month, five women accused Robbins of some form of sexual misconduct. Two of the women signed sworn statements accusing Robbins of harassment and saying that he “sexually harassed them by repeatedly pursuing them after they made clear they weren’t interested.” Another two women who worked for Robbins, according to BuzzFeed, said the motivational speaker “expected them to work alone with him when he was naked in his hotel room or in the shower.”

The lifestyle guru vigorously denied the accusations against him in a Medium blog post, saying the stories were “inaccurate, agenda-driven” and “pierced with falsehoods.”