Tonya Harding’s publicist Michael A. Rosenberg has quit after refusing to fine reporters for probing into the former ice skater’s past.

The publicist’s post began, “‘I, Tonya’ is now ‘Goodbye, Tonya!'” In it, he said he parted ways with Harding, saying her “adamant and final position” was that she wants journalists to be required to sign an affidavit agreeing to not question her “about the past.” If they did not agree to these rules, they would be fined $25,000, according Rosenberg’s post.

“Obviously, it doesn’t work that way; and therefore I’ve chosen to terminate our business relationship,” Rosenberg wrote. “I am sad as I write this; but at the same time I’m happy that I had such an adventure with the movie and with re-creating a new positive image for her in the public eye. And I sincerely wish her the best.”

The former Olympian has been in the limelight coinciding with the release of the biographical film about her, “I, Tonya,” starring Margot Robbie as Harding. On Thursday night, ABC broadcast the special “Truth and Lies: The Tonya Harding Story.” Harding was recently profiled by the New York Times, and she attended Sunday’s Golden Globe Awards with Robbie and co-star Allison Janney, along with the filmmakers.

Additional representatives for Harding did not immediately respond to TheWrap’s request for comment. 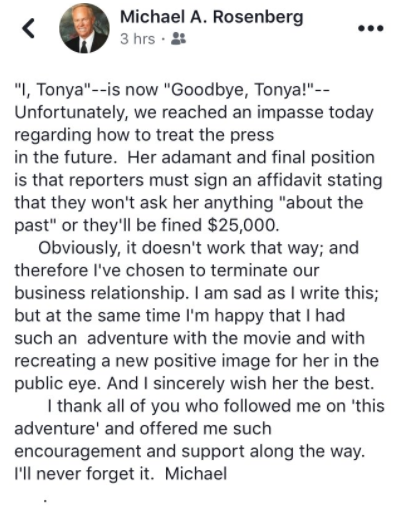 OscarWrap Magazine: The stars of ”The Big Sick,“ ”I, Tonya“ and ”Lady Bird“ stop by TheWrap for an interview and photo shoot