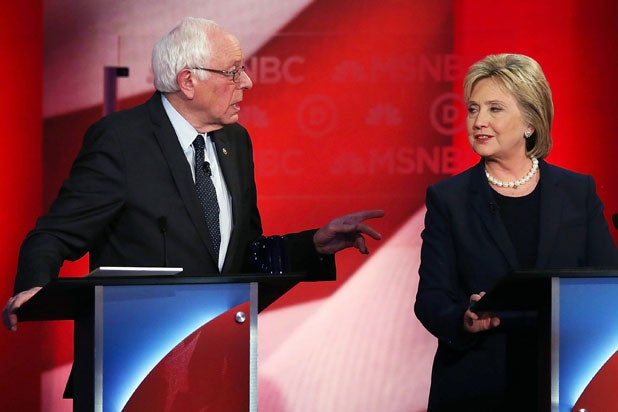 MSNBC’s Democratic debate was billed as the first true one-on-one showdown between Bernie Sanders and Hillary Clinton, and it actually lived up to the hype. Well, sort of. It depends on who you ask.

Here are our Top 6 moments:

1. Clinton takes Sanders to task
In perhaps one of the most contentious moments during the debate, a visibly exasperated Clinton unleashed on Sanders for his repeated criticism of Clinton’s Wall Street campaign contributions.

Sanders shot back, saying that in the last quarter Clinton’s Super PAC raised $15 million in “a whole lot of money from drug companies and other special interests.”

“Senator Sanders has said that he wants to run a positive campaign,” Clinton said. “But time and time again by innuendo and by insinuation, there is this attack that he is putting forth, which really comes down to anybody who ever took donations or speaking fees from any interest group has to be bought, and I just absolutely disagree with that, senator.”

Clinton then confronted Sanders head on. “If you’ve got something to say, say it directly,” she said. “You will not find that I have ever changed a view or a vote because of any donation I have received.”

After Clinton said she had “absolutely no concerns” about the ongoing FBI investigation into her use of a private email server during her time as secretary of state, Sanders, who had brought up the issue several times during the campaign, refused to comment.

“There is a process underway, and I will not politicize it,” he said.

3. Clinton gets booed
Sanders said that being the establishment candidate means being influenced by Wall Street, while Clinton shot back that Sanders shouldn’t insinuate that she can be bought. Clinton said it is “quite amusing” for Bernie Sanders to call her “establishment” as a woman running to be the first female president.

That’s when things got really heated.

Clinton said Sanders campaign has carried out a “very artful smear” against her for taking money from Wall Street.

That didn’t sit well with some people as boos could be heard throughout the hall.

By popular request: @HillaryClinton getting booed at a #DemDebate pic.twitter.com/G3GyS8cCy0

4. Clinton struggles to defend Wall St. speaking fees
Asked by moderator Chuck Todd if she would release transcripts of all of her paid speeches, Clinton replied: “I will look into it. I don’t know the status, but I will certainly look into it.”

Clinton tried to explain why she accepted more than $600,000 in speaking fees from Wall Street interests after her tenure as secretary of state. “They wanted me to talk about the world,” she explained.

5. Clinton shuts down Sanders’ Iraq vote line
As the debate veered from Wall Street to foreign policy, Sanders went to his default attack line — but this time, Clinton was ready.

“Let me agree with much of what the secretary said,” he said, before noting that he opposed the war in Iraq.

6. Debate ends on a high note
Asked whether they would consider uniting the party by picking their opponent as running mate, Clinton said she was “certainly going to unite the party, but I’m not — I’m not getting ahead of myself,” adding that, “If I’m so fortunate as to be the nominee, the first person I will call to talk to about where we go and how we get it done will be Senator Sanders.”

Sanders returned the favor saying, “On our worst days, I think it is fair to say we are 100 times better than any Republican candidate.”