1. Ticketmaster/Live Nation merger. With a combined revenues of more than $6 billion, the projected bonding of the largest concert ticket seller and the largest concert promoter could be, depending on who you ask, either a monster or simply a monolith. Approved in the U.K. last week, the merger, which was announced in February with Live Nation’s intent to purchase Ticketmaster for around $400 million in stock, is still awaiting the judgment of Congressional committees and regulators here in the U.S. 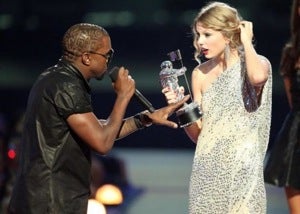 2. Kanye West jumps Taylor Swift. You know you’ve really screwed up when the normally soft-spoken President Obama calls you a “jackass.” But that was just one of the many consequences of Kanye West leaping up on stage at the MTV VMAs during the presentation of the Best Female Video to interrupt a visibly shocked Taylor Swift.

The rapper vehemently declared that Beyoncé should have won. The bullying Kanye, who later apologized, was treated to a universal chorus of criticism and Taylor? … Well, the resulting media tempest helped make the country ingénue whose "Flawless" album was already one of the top sellers of 2009, one of the biggest stars in the world. So thanks, Kanye!

3. Michael Jackson dies. Now that the combination of cultural flagellation and congratulations that surrounded his sudden but not all together unexpected passing this summer has subsided, we can all admit that the later years were, to put it mildly, not kind to the self proclaimed King of Pop. However, in death, like his former father-in-law Elvis, MJ once again attracted the love of his slumbering but huge fan base. As the world watched his celeb-strewn memorial on TV, Jackson topped the territorial and digital charts again for the first time in decades and showed his moves on the big screen in the quickly compiled hit documentary "This Is It!" More than anything, though, those tunes from his record breaking 1982 Thriller album reminded us just how amazingly talented Jackson was and what we really lost. 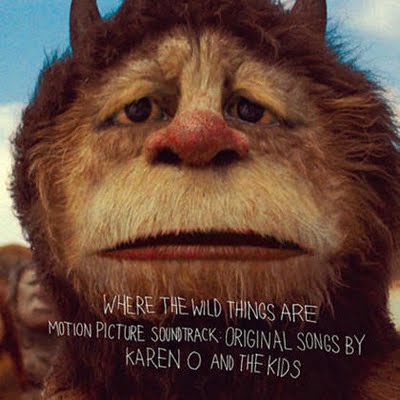 4. Where the Grammys roam. Looks like the devil and the nomination is actually in the details. The denial of a Grammy nod for “All Is Love,” Yeah Yeah Yeah’s lead singer Karen O’s sing-a-long song from the acclaimed "Where the Wild Things Are" soundtrack, was a blow, especially when Miley Cyrus did get a nomination.
At least for a few days this December. According to the rules of the Recording Academy, to qualify for Best Song Written for a Soundtrack, a tune must, well, have been written for a soundtrack. Upon investigation, that wasn’t the case for “The Climb.” The song from the "Hanna Montana" soundtrack had been extensively shopped around before it ended up coming out of Miley Cyrus’ mouth. With a posthumous disqualification, the Grammys pulled the “next eligible song in this category,” which was … “All Is Love.” 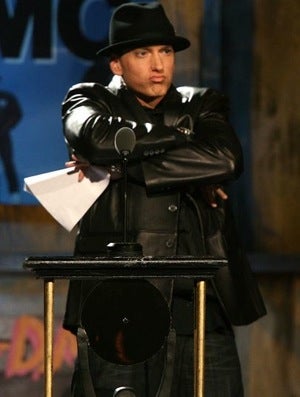 5. Eminem inducts Run DMC. Never at a loss for words, the Detroit rapper had a busy 2009 with two comeback album in "Relapse" and the remixed "Relapse: Refill." But that wasn’t Eminem’s greatest moment this year. In April, in a black leather fedora and jacket, the world’s biggest hip-hop artist showed why he is also the genre’s biggest fan. With a poetic, historical and touching tribute inducting Run DMC into the Rock and Roll Hall of Fame in Cleveland, Eminem drew the best of the past into the superlative of today. “As soon as I heard ‘Run’s House,’ man, it was pretty much a rap for me,” Eminem said, “Marshall Mathers became Eminem. It was the first time Run-DMC had changed my life, but it wouldn’t be the last. Two turntables and a microphone." Now that’s a tougher than leather legacy.
6. Lips cover Floyd’s "Moon." Born out of a meld of punk and psychedelic, Oklahoma’s beloved Flaming Lips, have always reveled in the unexpected and the unusual. This full cover of Pink Floyd’s 1973 "Dark Side of the Moon" masterpiece, which was released exclusively on iTunes until Dec. 29, shows them at the height of their not inconsiderable and inspired powers — and that’s pretty stunning for tunes you think you’ve heard a 1,000 times before. 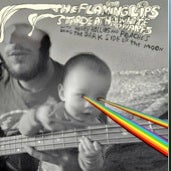 7. Remasters and re-releases. For a band that broke up almost 40 years ago, 2009 was a very good year for the Beatles. The Sept. 9 release of the Fab Four’s remastered catalogue topped the charts, with a little help from Beatles: Rock Band videogame, as fans re-bought a significant part of their record collection. The Beatles were the biggest blast from the past, but their longtime rivals the Rolling Stones certainly showed their nostalgia muscle with the multi-media 40thanniversary deluxe release of "Get Your Ya-Yas Out!," the live album from their infamous 1969 tour. In an industry pummeled by declining CD sales, the Beatles and the “Greatest Rock’n’Roll Band in the World,” as the intro on "Ya-Yas" proclaims, kept the lights on.
8. Superstars. When attacked, strike back, so the logic goes, by letting the big dogs hunt. With that in mind, the music industry, as it has so many times before, awaited releases by the superstar likes of U2, Eminem, Green Day, Mariah Carey and Whitney Houston or a touring Britney Spears and Madonna to save the day. Some (Whitney) did better than others (U2), but no one could stop the bleeding that saw CD sales down 19 percent in 2009. And no one, to put things in perspective, got anywhere near the 2.4 million copies of their second album that Justin Timberlake’s boy band ‘NSYNC shipped in one week in 2000.
9. Lady Gaga. "Britain’s Got Talent’s" Susan Boyle may seem like more of a Cinderella success story but, as her piercing celebrity tune “Paparazzi,” her flawlessly brave fashion sense and ubiquitous media profile reveal, Lady Gaga had the real glamour and gaul this year. Her confidence in being the one to cancel a planned joint tour with Kanye West to actually go out on the road herself proves, Gaga knows she’s a star — which makes all the difference in the world.
BACK TO MAIN PAGE
BIO Dominic Patten