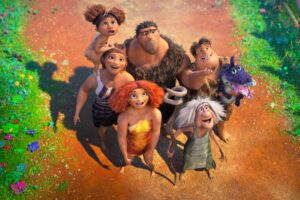 Thanksgiving is a time to express gratitude for the blessings we have in our lives. Yes, even this year. And despite the troubles facing the broadcast networks in recent seasons — especially the current weird one — with eroding audiences and the rise in streaming giants, there are some bright spots on each network’s lineup: the entertainment series that likely got a mention in executives’ recitals of grace before (nuclear family) dinner yesterday.

Below are the three highest-rated primetime shows among adults 18-49 on each of the Big 4 free over-the-air channels. The numbers are from Nielsen’s “most current” ratings metric, and include a week’s worth of delayed viewing (mostly DVR catchup) where available. To avoid an anomaly sneaking in, we only included shows that have aired multiple episodes (so, at least two) so far this fall, which counts the eight weeks since Sept. 21.

We excluded sports programming here, as the NFL would have gobbled up the top few slots for NBC and Fox. We also excluded news, which includes live news like the presidential debates, as well as CBS’ highly rated “60 Minutes” newsmagazine show.

Note: We dragged them out to two decimal places to break potential ties.

Notice a trend? “NCIS,” which premiered relatively late in the fall, would be among the CBS series to have something to say about this whole “most thankful for” thing. Be cool, “Young Sheldon” & Co. — we’ll see how things stack up when a few more weeks of “live” and delayed viewing are accounted for.

Told you it was a weird season, but we’re staying true to the numbers.

“This Is Us” is currently the No. 1 non-sports show on television. “The Voice” ain’t too shabby — even in its 19th season.

“The Masked Singer” is currently runner-up to “This Is Us” on broadcast TV, though the silly singing show has aired five more episodes to date than the Dan Fogelman drama. “I Can See Your Voice” has “Masked Singer” to thank for much of its success, since it airs right afterward on Wednesday nights. And “The Simpsons,” which is heavily reliant on late-afternoon NFL football, is still killing it in its 32nd (!) season.

“Grey’s Anatomy” and its spinoff, lead-in and benefactor (yes, it is all of those things) “Station 19” would make ABC’s list, but the long-running medical drama got off to too late of a start this season for early DVR viewership to factor into the current Nielsen reports. So enjoy the (temporary) grace inclusion, “The Conners.”

“The Bachelorette,” now on its second bachelorette of the season, is the No. 3 entertainment show on television. And Freddie Highmore’s “The Good Doctor” is still drawing viewers in its fourth season.

So those are the series network television executives are most thankful for this season. Now enjoy the Turkey Day leftovers, readers, and be sure to load up on some (online) Black Friday deals today like they’re day-old mashed potatoes.