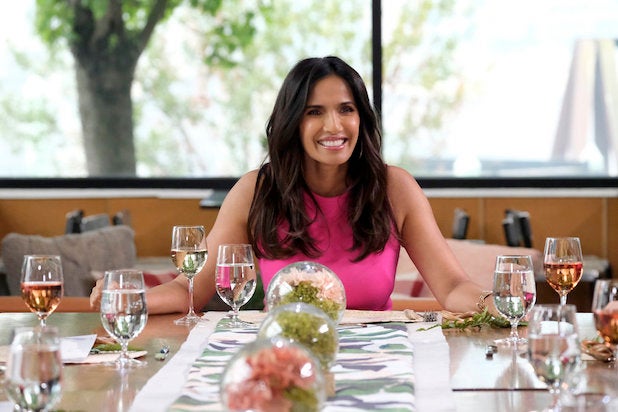 How ‘Top Chef’ Adapted for a New Season Despite a Pandemic, Wildfires and Portland Unrest

”We felt very strongly that it needed to deliver on the fan expectations of what a season of ‘Top Chef’ looks like,“ Bravo’s Matt Reichman tells TheWrap

Production on the Season 17 finale of “Top Chef” had just wrapped up in Italy last year when the looming threat of a COVID-19 pandemic became a reality. Facing a massive production shutdown, Bravo, which normally starts working on the next season of the high-end food competition series well in advance, had to figure out if Season 18 would be possible any time soon, where in the world would they shoot it and the biggest question of all … how would they pull it off?

By May, Bravo and “Top Chef” production company Magical Elves had come up with the answers to the when, where and how, with host Padma Lakshmi and judges Tom Colicchio and Gail Simmons on board to head to Portland, Oregon, for a pandemic-produced season that premieres Thursday.

“This notion of creating a bubble I think has become the go-to model for many different productions on different sizes and scales. And we had to take that same approach,” Matt Reichman, Bravo’s vice president of current production, told TheWrap last October during our virtual visit to the “Top Chef” Season 18 set. “We basically had to own a hotel.”

The production also went beyond NBCUniversal’s health and safety protocols, testing all the cast, crew and contestants even before they traveled to Portland. “Even the locals that we’re hiring have to enter a bubble, and they had to be tested numerous times before they could even walk foot on our set,” Reichman said.

With a “bubble” set up at a Portland hotel for Season 18’s 15 contestants and the crew, and stars like Lakshmi, Colicchio and Simmons confined to Airbnb rentals, the production then decided to limit the guest judges to a rotating panel of “Top Chef” alums who would also join the quarantine. Those former cheftestants included Richard Blais, Carrie Baird, Nina Compton, Tiffany Derry, Gregory Gourdet, Melissa King, Kristen Kish, Edward Lee, Kwame Onwuachi, Amar Santana, Dale Talde and Brooke Williamson. 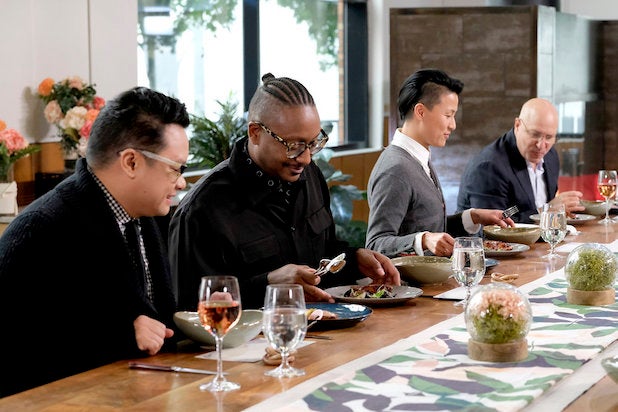 “It was fun having them all with us together because when am I going to have that opportunity to have contestants from all across different seasons of ‘Top Chef’ together in one room for days and weeks on end,” Lakshmi told TheWrap. “That was a beautiful family reunion. And that was the major silver lining to what was a very, very difficult season because it’s a food show.”

Colicchio said these special guest judges were “really helpful” in that they were able to empathize with the experience the 15 competitors on “Top Chef: Portland” were going through.

“We felt very strongly that it needed to deliver on the fan expectations of what a season of ‘Top Chef’ looks like,” Reichman said. “And given the time and place that we’re in, the sort of pivots that we may have had to do creatively, the last thing we would want to do is put something on-screen and have viewers look at feel like, ‘Wait, how are they serving people? How are they doing diners?’ We didn’t want to have those sorts of questions. So there’s moments in the show where we’re talking about certain protocols that we’re taking in order to keep people safe.”

According to Reichman, the Season 18 kitchen was approximately “30% larger than it’s ever been” in the history of “Top Chef,” in order to give the crew, competitors and judges significant distance from each other to cook and eat. This included blowing up the size of the judges’ table itself, something that Lakshmi really appreciated for other reasons.

“It’s this giant horseshoe and I have room to move now!” she said, laughing. “I always had trouble with judges’ table because there was no room for my legs. I’m a very long-legged person and especially if you wear heels, I could never cross my legs under the table. Little things like that.” 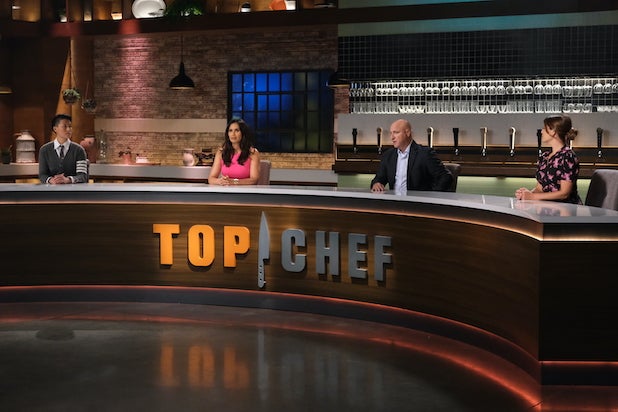 “Top Chef: Portland” altered other aspects of seasons past due to the pandemic, including turning Restaurant Wars into a high-end chef’s table challenge, rather than a pop-up restaurant competition, having the contestants order their ingredients online for curbside pickup from show partner Whole Foods, rather than make their usual mad dashes through one of the chain’s groceries ahead of challenges, and only hosting one large-scale event, which they pulled off at a very socially distanced drive-in.

“So we had hundreds of diners come, but they were all in their own cars, parked separately. And it was our sort of version of doing sort of like takeout-concession type food,” Reichman said. “So the chefs had to think about, What’s the chef approach to takeout? It’s not just, you know, put food in the bag and hand it over. And they have to really think about, like, how can we really elevate that experience of my life, a chef approach to something that people are experiencing?”

Season 18 also paid tribute to frontline workers battling the pandemic by having contestants prepare takeout meals for them during a challenge set up through World Central Kitchen.

“It’s a very emotionally resonant challenge that all the chefs are very moved by,” Reichman said. “And, you know, those are the sorts of things that we’re doing in order to still capture the spirit of ‘Top Chef’ and bring diners into our world.”

Another emotional aspect of the season for everyone involved was how hard the restaurant industry itself was hit by the pandemic, something “Top Chef: Portland” does not shy away from discussing at the very beginning of its season premiere.

“It’s hard not to talk about it. We’re all chefs. And whether we all have restaurants or work in restaurants, we’re all severely impacted by it,” Colicchio told TheWrap. “And there’s no hiding it. So it definitely comes up. And some of the [guest judge] chefs who we were with us, like Nina Compton, Kwame Onwuachi, Gregory Gourdet, these are all chefs that I worked with for the Independent Restaurant Coalition. Over a year ago, we were formed to address the issues of the pandemic in the restaurant industry. And clearly, being on ‘Top Chef’ and having that kind of soapbox really helped us manage to get $28.6 billion from the government to support the restaurant industry.”

With pandemic safety protocols in place, “Top Chef” was fully prepared for Season 18 in Portland when production began last September — or so they thought. “Once we figured out how to tackle COVID, as we were scouting, some of the political unrest started to bubble up, which [Portland] is obviously feeling,” Reichman told TheWrap last October. “And again, after some serious vetting and feeling out the city — and we had our producers there and the scouting we were doing and the bubble we set up — everybody felt like, ‘OK, this is manageable.’ And we still want to stay the course and make sure we’re showing the world the other side of Portland, the side that everybody knew and considered Portland. Because we felt strongly about it.” 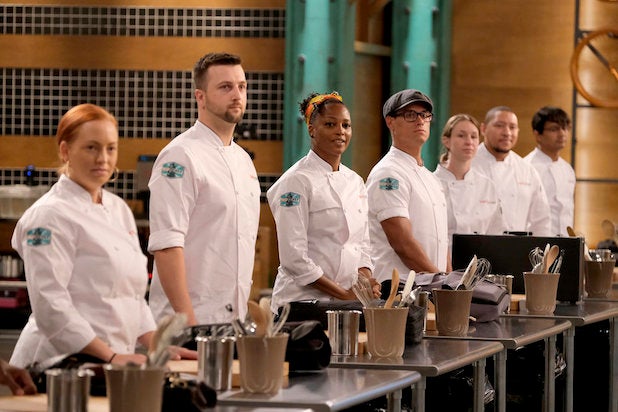 “And then the wildfires hit, which was another curveball,” he continued. “So yes, there’s been a lot to overcome this season. But I think that everybody is feeling really great that we stayed the course and were able to overcome those challenges and be able to honor the purpose of being there and doing what we can to reframe and rebalance what Portland is to people and make sure it really is that world-class tourist destination that I think that people of Portland are really proud of … The restaurant scene is unmatched for the size of the city. It’s fantastic.”

Lakshmi once again saw a silver lining in the difficulties facing Portland itself and thus production on “Top Chef.”

“Whenever there is some kind of stress or challenge in life, whether it’s from COVID or from the fires that erupted in the Pacific Northwest or the social reckoning of the Black Lives Matter movement, there is a benefit to everything, even a disaster, if you can find it,” she said. “And I think finding that benefit is helpful in order not only to process the tragedy or disaster that is happening, but to take something positive away from it. And I think that’s true for COVID.”

She continued: “What we realized in COVID is that we could make the show together, as a team, as a professional family, even when we didn’t have all the bells and whistles that we had become accustomed to over the years. That we could still deliver meaningful entertainment to our viewers. That we could still put 150 people back to work who didn’t have any way of having an income for all of those months and that we could also highlight chefs and highlight causes, whether it’s feeding frontline workers or highlighting restaurants from the African Diaspora and using the moment to our advantage and actually push the envelope with diversity, which is something I’ve been pushing for for years. And it allowed us to speak to the moment in so many different ways.”