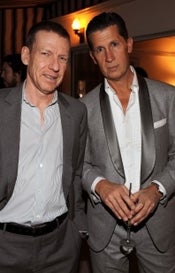 Now the New York Observer is reporting that Gerry Marzorati (pictured, left), editor-in-chief of New York Times since 2003, is planning to leave his post for another job within the company.

Not Marzorati's fault, but last year was a particularly rough one in terms of advertising for the magazine. Ad pages fell more than 38 percent, according to the Publishers Information Bureau.

Through March, ad pages are off 8.7 percent.