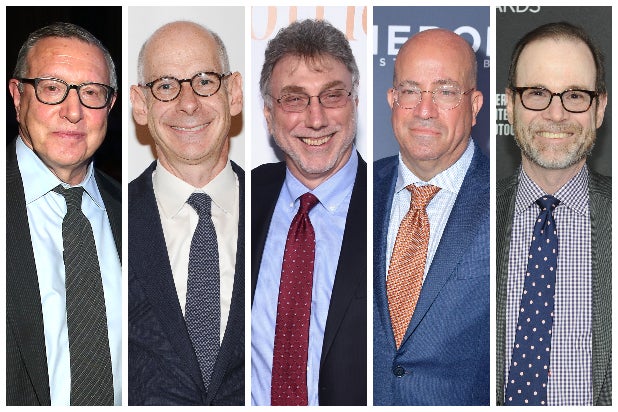 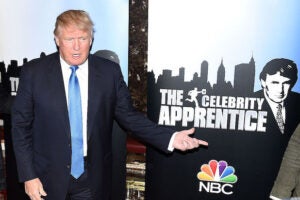 Can Trump Return to Movies and TV Shows After His SAG-AFTRA Resignation?

”I’m excited to see the next generation coming in and how they lead the industry forward,“ Vivian Schiller, the former president and CEO of NPR, tells TheWrap

A new era is unfolding with the imminent departures of a generation of powerful leaders on the American news media landscape. The next cohort of editors who take their place will undoubtedly shape the future of journalism.

“These are people I very deeply admire, but they are a generation of older white men who are leaving jobs,” Vivian Schiller, the executive director of Aspen Digital and the former president and CEO of NPR, told TheWrap. “In an era where many reasonable people believe that white men are not necessarily the best ones to be leading the future of news coverage, certainly not to the exclusion of others, this is a pretty big moment.”

In the past two months alone, editors and executives at CNN, ABC News, The Washington Post, the Los Angeles Times and Reuters have left or  announced their plans to leave their news organizations. This week, CNN chief Jeff Zucker, 55, told staff he will leave after his contract is over at the end of the year; The Washington Post Executive Editor Marty Baron, 66, will retire at the end of this month; ABC News President James Goldston, 52, will retire at the end of March; Reuters Editor in Chief Stephen Adler, 66, will step down in April; and at the L.A. Times, former executive editor Norm Pearlstine, 78, left the paper in December.

Meanwhile, open positions remain at Vox Media, where co-founder Ezra Klein and editor in chief Lauren Williams said in November they would be leaving this year; HuffPost, which has remained without an editor since Lydia Polgreen left for podcast company Gimlet last March; Wired, where editor Nicholas Thompson departed to become The Atlantic’s CEO this month; and the Center for Public Integrity, where CEO Susan Smith Richardson will exit in March to become the deputy editor of the Guardian U.S.

In many respects, the mass exodus at legacy media outlets is not unexpected, given the end of one presidential administration and the ages of some of the leaders. But these outlets will face larger scrutiny over whom they choose as successors and how they will address perceived blind spots in coverage, according to Nikki Usher, an associate professor at the University of Illinois at Urbana-Champaign and author of “Making News at The New York Times.”

“Right now, it is very clear how existential the threat to journalism is, from its most vociferous doubters — [those] who would never trust a legacy news organization — to the people that are willing to trust these news organizations that don’t see themselves represented in them,” Usher told TheWrap. “These are still really white organizations, and even if they look different, they embody and are part of a status quo of how institutional power works and is manifest. And the most symbolic way of noting that power is who’s in control of it.”

In the past year, a number of news organizations have publicly reckoned with their past coverage of communities of color and have implemented changes to help address past harms they may have caused. Journalists have also become more outspoken about the lack of diversity in their own newsrooms and have pushed back on coverage and op-eds published by their current or former outlets.

As norms and standards have changed over the years, so too has the expected role of a news organization’s top executive. Long gone are the days of the editor at a legacy newspaper “smoking cigars and drinking brandy” holed away in a “smoke-filled room with a small handful of trusted, like-minded advisers,” Schiller said.

“Whoever the highest person is certainly needs to have the final say — I don’t think there’s any dispute about that. But engaging and listening with your newsroom at all levels is, first of all, mandatory,” Schiller said.

A recent survey of 234 media executives and leaders across 43 countries also found that newsroom leaders understand that the best ideas don’t always come from the top brass, either, according to the Reuters study. 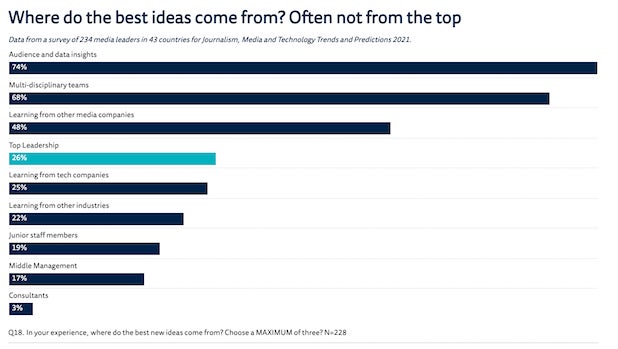 Courtesy of the Reuters Institute for the Study of Journalism

Aside from the benefit of engaging with journalists at all levels to help create a better news product in a digital age, Schiller said there are a number of norms that the industry writ large is grappling with.

“These are really tough issues about what does impartiality mean? And what does it mean to have a presence on social media? To what extent is that an extension of your newsroom presence? … What is the difference between allegiance to the news brand versus the brand of the individual reporters?” Schiller said. “These are all norms that are at least being questioned, if not shifting, and it’s going to be important for top editorial leadership to be able to listen and develop dialogue and trust with all levels of their editorial infrastructure in order to be successful.”

There is likely to be some competition over well-regarded candidates; as TheWrap reported this week, ESPN’s Kevin Merida appears to be a popular contender at both the L.A. Times and The Washington Post. But this isn’t to say there aren’t enough qualified candidates who can take on the job.

“Most of these are not jobs where you want to experiment with somebody who is completely untested. That said, there are a lot of great candidates out there,” Schiller said. “I don’t necessarily subscribe to the notion that unless we pick somebody who is untested, the field is too narrow. I think that’s a failure of imagination on some level.”

While a new generation of editors will help lead the industry into its next era, Usher cautioned that the cultural problems of a newsroom wouldn’t just be solved with the hiring of a new editor — especially if that editor is not given institutional support or the ability to hire and fire as they deem necessary.

“If you bring in an outside, dark-horse candidate, that dark horse candidate isn’t going to automatically have authority just by being the theoretically most powerful person in the room,” Usher said. “I really worry that a couple of these news organizations, very well-intentioned, take on a dark horse, the dark horse comes in, it’s too much change all at once, and it’s a crash-and-burn in two years… and then that sets everything back.”

In addition, the new batch of news leaders will face major challenges in the news industry — including financial struggles, misinformation, the polarization of the country and the ongoing reckoning with racism and injustice.

“If Marty [Baron] were on this call, he’d be the first one to say, ‘You know what? It’s time for some new blood to come in,'” Schiller said. “I’m excited to see the next generation coming in and how they lead the industry forward.” 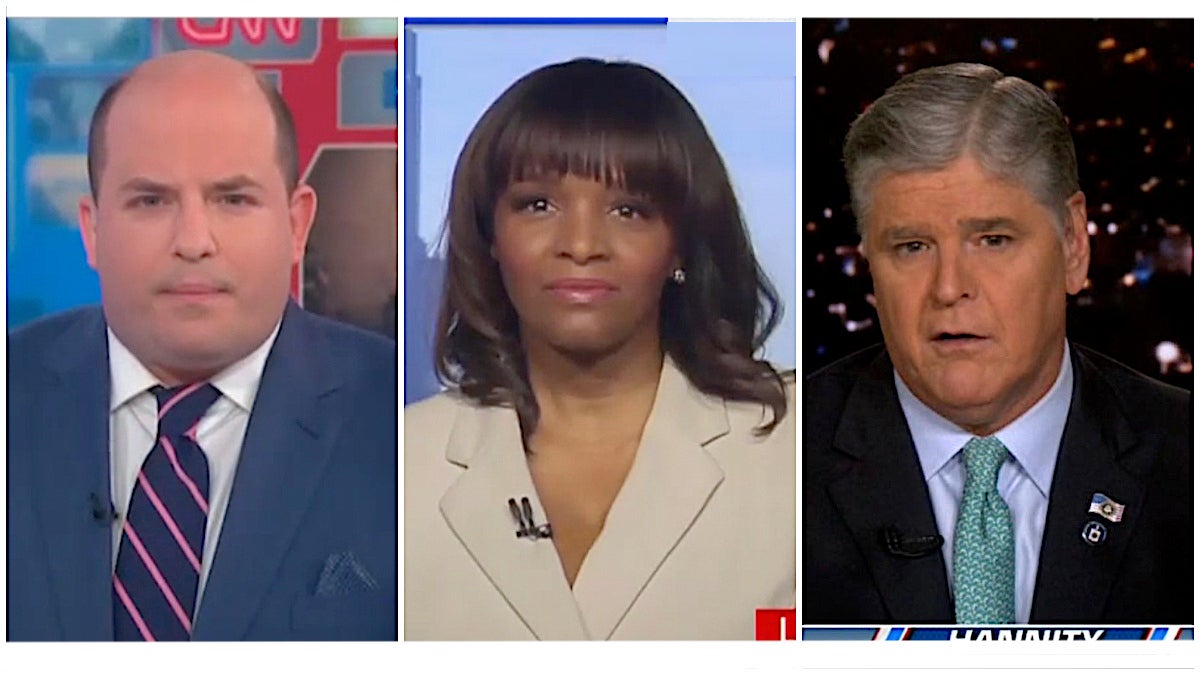