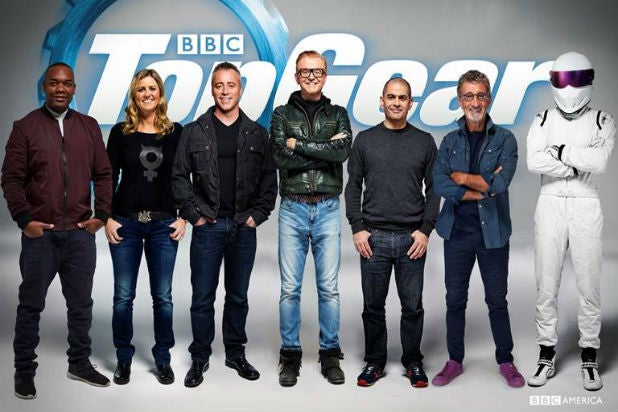 The revamped “Top Gear” has already hit a bumpy patch of road.

The BBC has apologized for a shoot in London over the weekend near the Cenotaph war memorial after complaints that the shoot was disrespectful. According to the company, the angle of photos of the stunt published in the press made it appear that it took place closer to the war memorial than was actually the case.

[W]e are acutely aware of how some of the images in the press look today via the angle and distance they were taken and for which, as [‘Top Gear’ host] Chris Evans has already said, we sincerely apologize,” the BBC said.

The British broadcasting institution said that the war memorial won’t be shown in the episode depicting the “large-scale, complex shoot,” and was never intended to be featured.

According to the New York Daily News, the stunt features new “Top Gear” castmember Matt LeBlanc and a driver doing donuts on a street near the war memorial. The display sparked complaints from onlookers, including a retired army officer who deemed it “gravely disrespectful.”

The BBC said in its statement that it “worked closely” with the Metropolitan Police Film Unit and the Special Events Unit of Westminster Council on the shoot.

According to the BBC, the shoot “required numerous road closures, health and safety regulations to be in place, and also included full disclosure to local residents, including the Treasury and Foreign Office.”

In his own apology on Monday Evans, said, “on behalf of the Top Gear team and Matt, I would like to apologize unreservedly for what these images seem to portray.”

“Top Gear” underwent a major revamp after longtime host Jeremy Clarkson was fired last year, following an investigation into an assault on producer Oisin Tymon. Shortly after Clarkson’s departure, his cohosts Richard Hammond and James May said that they wouldn’t return to the show without Clarkson.