This story about Tori Amos first appeared in the Nominations Preview issue of TheWrap’s Oscar magazine.

Veteran indie artist Tori Amos, who has spent her career working on behalf of sexual assault victims, wrote a key song for Bonni Cohen and Jon Shenk’s “Audrie & Daisy,” a documentary about the effects of teen cyberbullying.

How did you get involved with the film?
TORI AMOS I got a phone call and I was told, “Netflix wants to send something over.” My first response was, “Oh, Netflix, that could be fun.” And then self said to self, “Don’t be silly. Nobody calls you for fun, T. Are you delusional?” I watched it and couldn’t speak after seeing it for the first time. And then I spoke to Bonni and Jon, and that was the beginning of the collaboration. 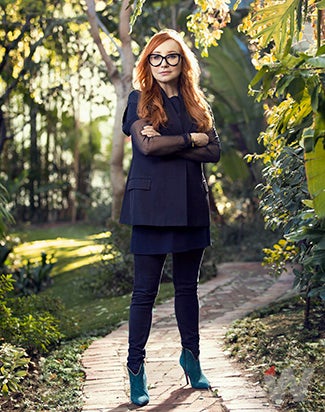 And it became your job to put words and music to something that left you speechless.
One of the toughest things for me to learn over the last 53 years is that listening is one of the most important things musicians can do. Noise comes out of our mouths, or our hands, or whatever it is. But really, in order to hear what the muses are saying, I have to get out of the way. And part of getting out of the way is getting quiet, and not projecting my reactions.

I’m a mom, and I have a teenage daughter. So when I first saw the film, I was reacting, if I’m honest, first as a mom, second as a grown-up that didn’t understand how our teenagers are assaulting our teenagers, which is horrific enough at a college level. I realized that it was in our high schools and middle schools, and some of the kids are being groomed at 11 and 12 to send pictures of themselves naked or half naked, which then get out online, and they’re bullied.

So taking in all the issues left me, yes, completely silent.

Did you feel a sense of responsibility to the people in the film?
Yes. Because real people are involved and in one case there’s been a death, it’s very different than writing for my own records or for a film with fictional characters. So after I spoke with Bonni and Jon, I went into a place of isolation for many days. I needed to get to the place of grieving that Audrie’s mother was going through, and the grieving for the loss of innocence that the girls who were alive felt, and the sense of loss and betrayal. I needed to sit with all those emotions and trust the muses.

There was a pivotal moment in the film where a poster above Daisy’s brother’s head says, “Monsters are made, not born.” And the muse started to scream and said, “This is your way in, but you need to change it so it becomes empowering.” And so it became “Heroines, they are not born, they are made.”