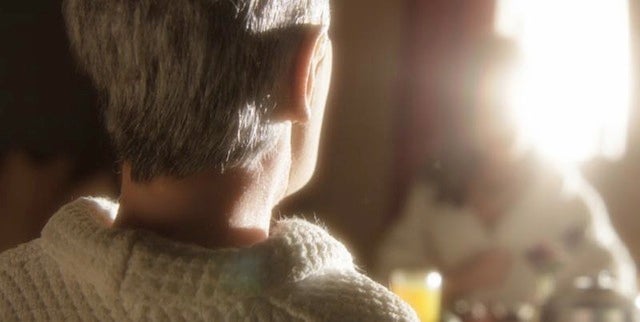 A Charlie Kaufman film is always an occasion to be surprised and delighted and his newest film, “Anomalisa,” doesn’t disappoint.

The film, co-directed by Kaufman and Duke Johnson, took the Grand Jury Prize at the Venice Film Festival and screened Sunday for the media in Toronto. It is a sexually-explicit, stop-motion story — I might even call it a meditation — about a middle-aged motivational speaker in search of human connection.

The trick is, the writer of “Being ” and “Eternal Sunshine of the Spotless Mind” has created an animated world in which everyone has the same face and the same voice except for his lead character, motivational speaker Michael Stone (voiced by David Thewlis) and a lonely customer service rep, Lisa, voiced by Jennifer Jason Leigh.

Stone’s wife speaks to him in the same white, male voice (Tom Noonan’s) as the room service clerk, the same voice as his son or the cab driver who picks him up at the Cincinnati airport. This choice recalls the “John Malkovich” scene in which Malkovich is at a restaurant and sees everyone with his face – he thinks he is going mad.

But of course, in a Charlie Kaufman world, the rules of normalcy are always askew. In this invented world, everything is familiar yet always slightly off, such as how the faces of the characters appeared to be molded masks rather than skin.

None of that takes away from the very human, familiar anxiety that Michael Stone is feeling – a disconnection from his family, boredom with everything in his world of motivational speaking and a desperate desire to make it all stop. The film is existential at its heart, with the surrealism that is Kaufman’s distinctive voice.

He seeks connection with Lisa, who with her own voice and face is an anomaly, hence “Anomalisa,” but she is hardly special, hardly interesting. Her voice draws Stone in. This leads to a fascinating stop-motion sex scene between strangers and, presumably, an R-rating.

This is the first film Kaufman has made since “Synechdoche” seven years ago, and the return of a filmic voice so original and, well, bent, is welcome indeed.