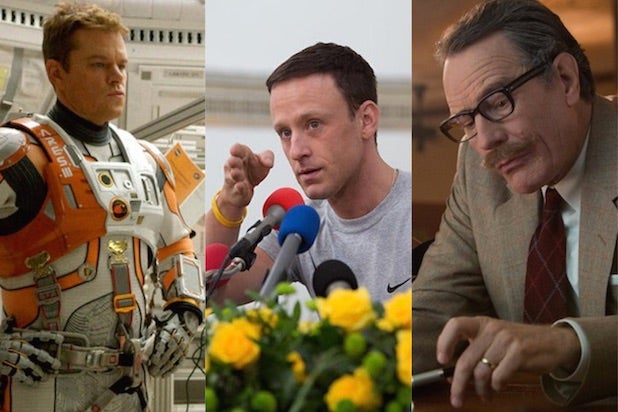 "The Martian," "The Program" and "Trumbo"

The 48 films are all among the first batch of selections to be announced for the 2015 festival, which will run from Sept. 10-20 in Toronto.

The festival’s typically hefty helping of high-profile awards contenders includes a number of films dealing with hot-button social and political issues. “The Danish Girl” stars Redmayne as the first recipient of male-to-female gender reassignment surgery, while “Stonewall” is “Independence Day” director Emmerich’s look at the 1969 New York City riots that were instrumental in the right for gay rights.

Other politically-charged films include “Trumbo,” from “Game Change” director Jay Roach, which stars Bryan Cranston as blacklisted novelist and screenwriter Dalton Trumbo; Peter Sollett’s “Freeheld,” with Julianne Moore and Ellen Page as the real-life lesbian couple who fought the state of New Jersey for pension rights; “Beasts of No Nation,” a story of an African child soldier starring Idris Elba and directed by Cary Fukanaga (“Sin Nombre,” “Jane Eyre” and the first season of “True Detective”); Tom McCarthy’s journalism drama “Spotlight,” with Michael Keaton, Rachel McAdams and Mark Ruffalo in the story of a Boston newspaper’s expose of abuse in the Catholic Church; and Paul Gross’ “Hyena Road,” about three different characters facing the moral complexity of modern warfare.

Although the festival’s full documentary program will be revealed at a later date, the initial announcement also included a special world premiere screening of “Where To Invade Next,” the first documentary in six years from Michael Moore.

The opening-night film will be “Demolition,” starring Jake Gyllenhaal and directed by “Wild” and “Dallas Buyers Club” director Jean-Marc Vallee, a Canadian.

Other world premieres at the festival include “The Martian,” with Damon, Chastain, Jeff Daniels and Chiwetel Ejiofor; “Stonewall,” with Jonathan Rhys Meyers; “The Program,” “Philomena” director Stephen Frears’ film about Lance Armstrong; Jocelyn Moorhouse’s “The Dressmaker,” with Kate Winslet and Liam Hemsworth; and “Desierto,” a drama about Mexican immigrants starring Gael Garcia Bernal and directed by Jonas Cuaron, the son of Alfonso Cuaron and the co-writer of his father’s “Gravity.”

“Legend,” a new crime drama from “L.A. Confidential” writer Brian Helgeland starring Tom Hardy in a dual role as the real-life British gangsters the Kray twins, is an international premiere, screening at TIFF on the heels of its UK release.

One of the the most unusual films on the list is likely to be “Anomalisa,” a stop-motion animated film co-directed by “Being John Malkovich” and “Eternal Sunshine of the Spotless Mind” writer Charlie Kaufman.

The Cannes Palme d’Or winner “Dheepan” will make its North American premiere, while the festival will also showcase a number of other Cannes titles: “Son of Saul,” “Sicario,” The Lobster,” “Louder Than Bombs,” “Mountains May Depart” and “Youth.”

Because of TIFF’s policy of transparency, and its refusal to allow films that are planning to play the Telluride Film Festival to bill themselves as world premieres, it’s now possible to view the Toronto lineup and figure out which films are likely planning to appear in Telluride and Venice, both of which take place just before TIFF.

“The Martian,” “Stonewall,” “Trumbo” and “Where to Invade Next” will not appear at any festival prior to Toronto, while “The Danish Girl” and Atom Egoyan’s “Remember,” billed as North American premieres, could well play in Venice but not Telluride.

Films whose “Canadian premiere” billing makes them likely Telluride bookings include “Black Mass,” “Beasts of No Nation,” “Room,” “Spotlight” and “Son of Saul.”

A number of additional announcements will be made in the coming weeks. The final lineup typically tops 300 features and shorts.

If you did not pack high heels or the correct type of tuxedo (bowties only, no regular ties), then 2015 film festival was "No Cannes Do For You." From secret screenings to jam-packed appearances by Hollywood royalty and British royalty, Here's The Party Report's tourÂ through the bestÂ parties at the Cannes Film Festival.

Georgina Chapman squates for a chat with Duchess Fergie at amfAR on Thursday night, as Zoe Kravitz, Marion Cotillard, and Michael Fassbender wrangle some paperwork. (Sarah Ferguson) What's the best way to keep an advance screening of a hot Jake Gyllenhaal movie leak-proof and crasher free? Screen it at sea. TheÂ Weinsteins revealed "Southpaw," which is already an early Oscar contender, on a yacht Friday night. VIPs like Adrien Brody, who The Party Report last spotted at the Mayweather-Pacquiao fight in Vegas, Michelle Rodriguez, models Adriana Lima and Jourdan Dunn.

Mary J. with the boxer on Friday night. (Getty Images) "I love this film," festival director Thierry FremauxÂ  told the crowd. Gyllenhaal was actually the fest's jury, creating a conflict of interest for a festival slot. Cate Blanchett and Rooney Mara's performances were not the only popular thing about "Carol." Â Their party at Baoli Beach for Todd Haynes' love story drew strong.

Blanchett and Mara; Haynes and costume designer Sandy Powell. (Getty Images) The transformation from restaurant to Riviera chic lounge had more crashers out front trying to get in than any other night. A few nights later in the same place,Â "Sicario" (hitman) was the name on everyone's hit list.

Festival juror Sienna Miller with Camila Alves and Naomi Watts at the "Sea of Trees" party. (Getty Images) It felt a bit more Mexican Riviera than French Riviera at the same spot. Â Fajitas and chili con carne by the sea refueled the "Sicario" crowd, importing the flavor of the Mexican drug cartel film. Emily Blunt channeled Mexico by ditching her heels and going barefoot, before a handler got her some sandals. Josh Brolin was also on the move, emerging from the VIP to mingle, escaping the french security guards around Cannes that Chris Ryan once noted all look like Bond villains. The through line at theseÂ high end bashes wasÂ Le Grand Fizz, a souped up summer recipe of Grey Goose's awards season cocktail program as they hosted several of the top film parties.

Gus Van Sant and Megan Ellison may have been driven to the bottle by the boos for "The Sea of Trees". (David M. Benett/Getty Images) It's France. They have the French flag right there on the bottle. This should not be surprising. De Grisogono founder Fawaz Gruosi flanks new director Natalie Portman at the jeweler's Tuesday night bash at the du Cap. (David M. Benett/Getty Images) The parties came in all sizes, from intimate restaurant bashes like IMDB's and Savannah College of Art and Design's "Ovation for Oscar" to the luxury line bashes.

The Creative Coalition's Robin Bronk,"Everest" producer Lauren Selig, and Jenny Jacobi join IMDB founder Col Needham (right) at Mantel. Delavigne and Didier Drogba, emblematic of the mix of cross-industry celebrity at Cannes. (Getty Images) Global soccer star Didier Drogba made the scene in Cannes, typifying the international, cross-industry celebrity stew at the festival. This was just days before his teammates would carry him off the field in his final game for Chelsea back in England on Sunday, May 24.

(Michael Regan/Sunderland AFC via Getty Images) SCAD toasts the Palais screening of "Ovation For Oscar', a doc about the fashion designer, not the statue. (Luca Teuchmann/Getty Images for SCAD) Two big bashes went head-to-head as Emily Blunt, Rachel Weisz and Sienna Miller were amongst honorees at Calvin Klein's celebration of women in film. Left: The Calvin Klein scene. Right: That is not a maligned french to english translation of Cara Delavigne's name in lights. It was the de Grisogono "Divine in Cannes" decor. (Getty Images) Haim, who have been everywhere in the last month from radio station pop concerts in Carson to the Calvin Klein villa, played at the bashas OthersÂ took boats out to Paul Allen's "Bollywood" themed party on his yacht, Octopus. Paul Allen (2nd from left) played guitar. (Instagram photo credits clockwise from top left: BollingerAmber, SusanRockefeller, Philly_Walsh) The Bond villain clones there would have smashed any overt amateur photography of guests LeonardoÂ DiCaprio, frequent sailor Adriana Lima,Â Cannes jury foreman Ethan Coen,Â John C. Reilly or Amy Poehler, but they could not stop Instagram. The last of the big bashes was amfAR at the Hotel du Cap, raising $30 million dollars as 40 super models walked to the live sounds of Mark Ronson and DiCaprio's own Banksy artwork got auctioned off 30 minutes away from the plebes on the Croisette. It is the kind of crowd that makes Oscar caliber movie stars Â poor by comparison.

Robin Thicke (with April Love Geary) and Richie Akiva at Akiva's 1Oak satellite at club Gotha in Cannes earlier in the week. Richie Akiva's after party in a villa has the crowd ushering the sun back in to the sky one more time in France before heading off to Monaco or retreating back to the U.S. to recover over the long weekend.

The Scene at Cannes 2015: Red Carpet Premieres and Beyond (Updating Photos)