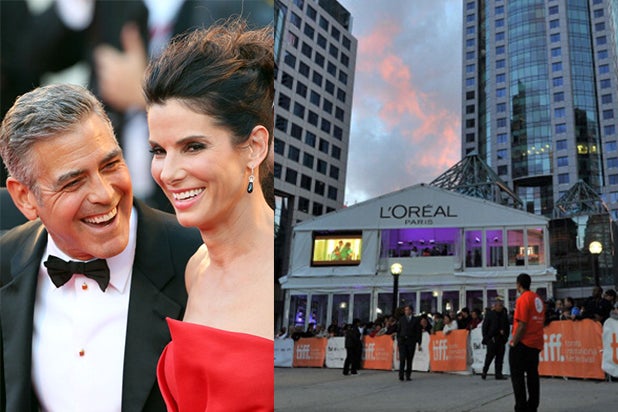 Slotting the Toronto Film Festival’s 366 films in to your own screening schedule might drive anyone to drink. When it does, here’s the best parties and most choice company to keep up north.

Nobody wins an Emmy until Sept. 15, but AMC crowns itself early.

They’re opening AMC’s Storys,  a multi-level hospitality empire a few steps away from the Bell Lightbox.

Left: The clubhouse at 11 Duncan Street.

“We’re delighted to be returning to TIFF with an even bigger presence than we mounted in 2012,” says AMC’s Samira Qureshi.

It helps to be local. Toronto hospitality heavyweights Icon Legacy and Ink Entertainment teamed up with LA’s David Manning to pull strings behind the scenes, landing a solid slate of events like the Creative Coalition dinner and One X One gala in addition to multiple film parties.

Expect parties to begin here, but spill out to Icon and Ink’s  Patria and La Societe and clubs Cube and F-Stop around the city.
Nikki Beach Toronto @ The Spoke Club

Even after Labor Day, pack your whites. Above: The Nikki landscape at the Cannes Film Festival.

The bleached umbrellas and chaise lounges from St. Tropez, South Beach, and Ibiza that endure sand and champagne soaked beach parties will be imported to the rooftop patio of the Soho-esque members only Spoke Club.

Over the years at the Toronto pop-up, Bono, Seth Rogen, Sarah Silverman, Edward Norton, Madonna, Michael Douglas, and Will.i.am have toasted TIFF success within the club that trumps up its secrecy as a “social refuge” and “sanctuary.”

Good news: This sanctuary is open until 4 AM from Thursday-Sunday of opening weekend.

While known for their daytime Sunday brunch parties (and there’s one of those this year for those forgoing both film and the first full day of NFL) one of the other highlights is the tea-time fashion show on Saturday, just to remind everyone of Nikki’s beachy roots.

“Here’s Looking At You” @ Buonanotte

Amidst the revelry, L.A. and Toronto are also combining forces for charity.

David Arquette (above left, with Toll) hosts the soiree, where Ferras (above center, with Katy Perry) will perform.

This will be the second cancer fundraiser they’ve produced this summer alone. With cancer touching both Arquette and Terzian’s families, they’re leaning in to the cause for reasons other than getting written about in columns like this.

With the lines they draw outside their LA venues, expect the Toronto team-up to also light the sidewalk with flashbulbs.

The subject matter’s no fun – Hill Harper as a dad protecting his daughter from her mother’s crack addition – but the film’s got early buzz.  They’re planning for a big night when it premieres on Sunday, September 8: not one party, but two.

In addition to Harper (who stars and produced), Wayne Brady, La La Anthony, Sharon Leal, and the reemergence of “The Blind Sinde’s” big man Quinton Aaron add talent heft. Plus La La’s NBA husband Carmelo Anthony is expected to round out the festivities, which will conclude at AMC’s Storys.

“Can A Song Save Your Life” Cast Party @ Patria

After the early Saturday night premiere (6:30 PM on September 7), Keira Knightly, Mark Ruffalo, and Adam Levine will descend on Patria for a post-party.

Kristen Wiig, Guy Pearce, Hailee Steinfeld, and Nick Nolte top the bill for “Hateship Loveship.” After the Friday afternoon premiere at the Princess of Wales, they’re celebrating during happy hour at the Gansevoort Hotel popup.

At Sundance, the Gansevoort has snaked a line of freezing hopefuls down Main Street on opening weekend the past few years. Fiji water, which is an official TIFF partner pitches in to also co-host this amped up soiree, which turns in to a Vegas casino party later in the night.

Harvey Weinstein and Jason Reitman at TIFF in 2012.

After debuting as the “surprise screening” at Telluride last Thursday afternoon, Reitman spends the weekend after Labor Day with a Saturday night screening in Toronto.

The team behind the Kate Winslet-Josh Brolin drama gets a taste of Reitman’s homeland (Canada) with a reception at Stock in The Trump Hotel on Saturday night.

More Invites to Look for In Your Inbox

Anything at Soho House

Last year it was like the bar scenes from “Midnight in Paris,” with everyone from Jude Law to Skrillex partying late in to the night. Starting with Thursday night’s kick-off, they’ll all be good.

All of these events are private and invite only, except the “Here’s Looking at You” fundraiser which is selling tickets.