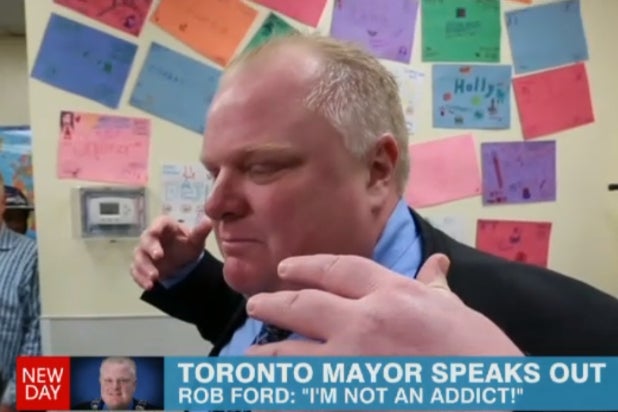 So who exactly is Rob Ford then?

“I’m no-nonsense, there’s no phoniness,” he told Weir in a spirited segment where emotions ran the gamut. “I am what I am and I’m sincere, right? Am I polished? No I’m not polished, you know?”

Monday’s segment probably won’t help Ford’s reputation, which spiraled even further down on a day where he was stripped of most of his powers — and budget — by his City Council. He also physically knocked down a woman during an altercation in session, later apologizing and saying he thought someone was about to attack his brother. It was not the first time Ford has apologized recently, a fact “Saturday Night Live” used in its cold open this weekend (embedded in the link directly below).

In the CNN interview, Ford told Weir why he finally confessed to smoking the illegal street drug: “I just had enough. I was sick and tired of all these allegations and all this bullshit.”

Ford then apologized for cursing in front of the children present during the exchange.

He continued on topic: “I made mistakes, I drank too much, I smoke some crack sometimes. What can I say? I made a mistake, I’m human. I’m only human. I’m not saying it’s right, it is absolutely wrong what I did, but I’m moving on. And you know what, I am moving on.”

Ford then blamed the media for part of his troubles, when Weir accused the politician of hiding behind semantics during his initial drug use denials. He told Weir that media members are “all cut from the same cloth.” That’s when Ford’s brother, Doug, had to step in to stop his sibling from making yet another on-camera mistake.