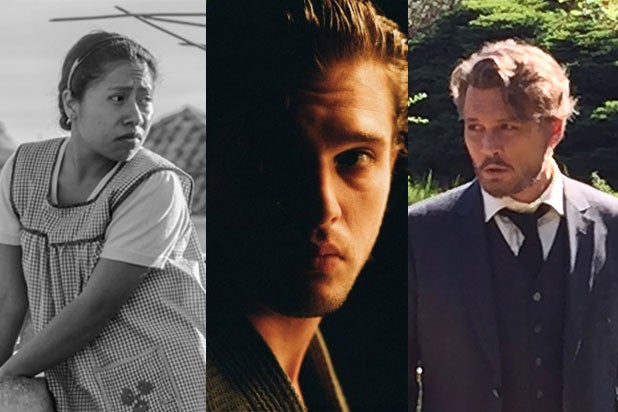 Hollywood is bracing for business as usual at this year’s Toronto International Film Festival — in a business that has become wildly unpredictable in an age of streaming revolts and indie buyer breakdowns.

This year, mid-size distributors like The Weinstein Company and Global Road have been dropping like flies or eyeing bankruptcy. Netflix is generating original content at dizzying speeds and avenging its rebuke by the Cannes Film Festival, while Amazon goes back to the drawing board (and back to the want ads for a new top executive).

Disney’s Fox acquisition has dealmakers watching and waiting, while the talent just wants to sit with cool kids A24 and Neon.

In an interviews with multiple players in the indie film space, TheWrap discovered some recurring themes as buyers and sellers head north of the border for TIFF 2018:

1. Festival Aimed at Marketing, Not Sales

In addition to the festival trimming 20 percent of its film programming and retiring categories like Vanguard and City to City in 2018, many insiders see the event leaning hard into its prestige base and ignoring its role as a sales force.

“Honestly, this feels like the TIFF of old where the studios are trotting out their contenders,” one top dealmaker, who reps both filmmakers and prospective buyers, told TheWrap.

In fairness, TIFF has always been a prime kickoff event to market and promote awards contenders, though this year does not seem as loaded with high-profile discoveries like “I, Tonya” — which sold for roughly $5 million sale least year to Neon and 30West — and then landed three Oscar nominations (and a win for supporting actress Allison Janney).

Many of TIFF’s biggest titles are coming from immediate festival predecessors Venice and Telluride that have distribution in place and are vying for awards attention: Damien Chazelle’s “First Man,” Bradley Cooper’s “A Star is Born,” Marielle Heller’s “Can You Ever Forgive Me?”, Karyn Kusama and Nicole Kidman’s “Destroyer,” Robert Redford’s “The Old Man and the Gun,” Steve McQueen’s “Widows” and so on.

“We’ll sell movies there, it’s still the second most important market behind Sundance, but we have screenings at the festival that don’t necessarily serve the festival’s agenda,” the dealmaker said.

Those include finished movies not in the official lineup, which will screen around the festival for suitors and top studio executives. That includes Zac Efron’s turn as serial killer Ted Bundy in “Extremely Wicked, Shockingly Evil and Vile,” which Voltage Pictures is selling.

Johnny Depp’s “Richard Says Goodbye,” about a mild-mannered professor who gets a terminal diagnosis and starts living on the edge, belongs to embattled Global Road Entertainment. The company had intended to take the the film to Toronto before an end-of-summer financial meltdown that will most likely culminate in a bankruptcy filing just as TIFF begins, insiders familiar with the company told TheWrap.

The financial troubles could mean Global Road bails altogether or comes to market with even more of its completed films (including Kiernan Shipka’s “The Silence” and another troubled Depp title, “City of Lies”). A rep for Global Road had no immediate comment.

“There are fewer films to chase, but hopefully there will be a good business. Less of a selection means an easier path for us,” said another top indie sales executive.

Another frustration echoed by many buyers was how bullish they find the sellers market, at least in terms of quality product up for grabs.

“There’s a lot of money in the marketplace, but there’s a lack of product in the marketplace, that’s the problem,” said another top sales agent. “For a long time, financiers and distributors have been getting involved at a script level. Now there are so many people buying content and nothing is sitting on the shelf ready to make.”

3. Will the Streamers Stay on the Sidelines?

Even your cousin borrowing your Netflix password knows that the streaming giant is no longer on the acquisitions spree it once was. A massive internal shift to produce and own original films and TV series is now a guiding principle at the Hollywood-based streamer.

Potentially worse for the sales market? The company is poised to finally rattle American movie theater owners by releasing a film that refuses to be ignored, in Alfonso Cuaron’s “Roma,” an obsessively-meticulous retelling of the “Gravity” director’s childhood that will screen in competition (take that, Cannes).

Buzz has it that the film will be Netflix’s first-ever Best Picture nominee, and will drive subscribers who are both cinephiles and global customers hungry for high-brow content.

Then there’s Amazon Studios. With the recent exit of film executive Jason Ropell, and new honcho Jennifer Salke retooling the studio in the wake of her disgraced predecessor Roy Price, sellers are puzzled about the rival streamer’s current game plan.

“I don’t think their mandate has changed any way, they’re still always looking for a ‘Manchester by the Sea,’ but they’ve definitely been quiet,” another sales agent said.

The streaming giant also has some business of its own in Canada, including launching “This Is Us” creator Dan Fogelman’s feature “Life, Itself” as well as Timothée Chalamet’s addiction drama “Beautiful Boy.”

The agent was not optimistic that Amazon will be spending much of its meager coffers until executive leadership has a new strategy (and probably a few new faces) in place.

Of course, Netflix and Amazon are not the only streaming games in town anymore. Disney’s forthcoming streaming service (nicknamed the “Netflix killer”) has signaled to buyers it is looking for outside content to offer, multiple dealmakers said.

So has Apple, which has yet to hire a film counterpart for its TV hotshots Zack Van Amburg and Jamie Erlicht. But one individual familiar with the company’s plans said Van Amburg will be on the ground with Apple’s veteran indie film executive Matt Dentler.

“They won’t be festival ready for six-to-nine months, and they’re looking for something very specific,” the agent said. “[They want] a very aspirational, global product, but they’ll be a buyer.”

DirecTV will represent owner AT&T per usual, multiple individuals said, seeking pre-release SVOD deals and distributors to partner with on acquisitions — though, the insiders added, it’s only a matter of time before the ATT-Time Warner merger reshapes that pipeline with HBO and Warner Bros. Entertainment under the same giant roof. Speaking of HBO, it’s not out of the question that the cable network will pull a surprise buy like they did in Sundance with Laura Dern’s “The Tale,” especially after marching orders for more hours of content to offer viewers.

One of the dealmakers TheWrap spoke with shook off the uncertainty of the streaming revolution, bolstered by the unexpected heat around the summer box office and the spectacular performance of recent indies.

“In terms of U.S. distributors, there is a lot of opportunity in a strange way. If you look at the theatrical business, especially indie, it has been doing extremely well. You look at ‘Three Identical Strangers,’ ‘Eighth Grade,’ there is an appetite out there for the right, good product to be in theaters,” the agent said, adding that many creators “feel lost on Netflix.”

“Two years ago, directors would have jumped at Paramount or Fox. Now every director wants to work with A24 or Neon,” another festival content rep told TheWrap.

Speaking of Fox, Paramount and the indie theatrical establishment — oof.

The aforementioned troubles facing Global Road are certainly not indicators of the middle-man’s demise, but it’s not inspiring confidence in the market. It was only in February, at Berlin’s annual festival, that Global Road CEO Rob Friedman announced the mini-major would spend $1 billion in original productions over the next three years.

Six months later, and the company is widely expected to sell for parts or file for a Chapter 11 reorganization before TIFF ends. The rebranded ashes of disgraced Harvey Weinstein’s film company, Lantern Entertainment, endured similar trials in acquiring TWC and does not look likely to have an active buying presence this year.

Relativity Media’s sale to UltraV Holdings was only approved on August 16, after a second bankruptcy declaration in two years. The companies, once seen as saviors of the mid-budget movie and the antidote to slates driven mostly by superhero tentpoles, are bottoming out at record speeds.

“Companies that boost up really quickly, all steroided up, that can be a dangerous thing. It’s unpredictable,” said one film sales executive.

Specialty labels at major studios like Universal’s Focus Features and Sony Pictures Classics always come looking to shop, though they may be the only stables unit playing ball at the moment aside from Lionsgate and STX. Paramount seems focused on stabilizing its main slate and letting new film group president Wyck Godfrey cook up his own original productions at shingle Paramount Players.

6. And What about Fox Searchlight?

And then there’s Fox Searchlight. As it went at Sundance, no one is sure about the future of the specialty unit is as Disney prepares to acquire 20th Century Fox film and TV assets.

“Word is they’re looking, specifically for something lighter, but it’s all talking. Searchlight is quiet,” said one agent.

Reps for Searchlight did not respond to TheWrap’s request for comment.

We’ll certainly be talking about it. Follow TheWrap for breaking news and analysis from TIFF 2018.